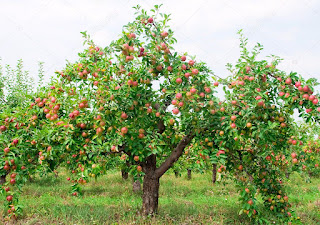 “A good tree bears good fruit.”  In discussions among Lutherans about the Law, it seems to be inevitable that this theological axiom will be quoted.  It is usually taken to mean that the Christian, who is a new creation in Christ through the work of the Holy Spirit in baptism, does not need to be told what to do.  Instead he or she will naturally and automatically produce the manner of life that reflects God’s will.  Typically it is quoted as proof that the Christians do not need the Law addressed to them in the form of exhortation.

Two things need to be noted at the outset. First, the statement, “A good tree bears good fruit” is not some kind of special revelation provided by the Lord.  Instead it is an aphorism – a brief statement of widely accepted wisdom. Davies and Allison note that it “is known from other texts and must be judged a commonplace” (The Gospel According to St. Matthew, 1:706).  Second, it must be recognized that while Jesus uses versions of this phrase, he never uses it to make this specific point.  The specific use for which Jesus employs the saying is to make the point that the character of an individual is recognized by what he says or does (Matthew 7:16, 20; 12:33; Luke 6:44).  Jesus applies this truth to false prophets (Matthew 7:15-20), Pharisees who blaspheme the Spirit (Matthew 12:33-36), and people in general (Luke 6:43-45).

Jesus never uses the general truth, “A good tree bears good fruit,” in order to say that those who have received regeneration through the work of the Spirit will naturally and automatically produce the manner of life that reflects God’s will. This has not stopped Lutherans from speaking as if he did, or from using it to describe the spontaneity of good works.  For example, Steven Hein has written.


Fruit, as we know, is simply the product of a healthy growing fruit tree or vine.  It just appears on the branches spontaneously and effortlessly as a consequence of the tree being  alive according to the type of branch that God created.  It is just the nature of grape vines to produce grapes or apple trees to produce apples.  It is as simple as that.  Reflect on what this means for a moment.  The vineyards are silent at night, are they not? There is no grunting or groaning as the fruit matures … and no whining questions: “Do we have to produce grapes? How many?” They just silently do it!

There is an insight here about good works in the Christian’s life in Christ.  To live in Christ is simply to bring forth the works of Christ; works that he produces simply by being who he is through each of us by virtue of who we are in him.  As we live in Christ and his righteousness through faith, our faith is just naturally and spontaneously fruitful in works of loving service.  It is what faith does.  As an indicative statement, faith is active in love.  Moreover, God is love, and he created and redeemed us from sin to love.  It is not a matter of compulsion or coercion, as if works of love were something foreign to our recreated nature.  The grace by which we live and grow in Christ is the grace that empowers and engenders a fruitful faith.  Works of love are how faith expresses itself in daily living. They are spontaneous and seemingly effortless, without calculation or self-concern (“Sanctification: The Powerful Pardon,” Logia: A Journal of Lutheran Theology 6 (1997): 19-23, 22).

What does effective ministry of the law do for the new self?  Nothing in any direct way, but it does create a powerful hunger and thirst for our Lord’s bread of life and living water of the gospel. The law itself imparts no spiritual nutrition or power for Christian living, but it is God’s great appetite builder that sends us running for the word of life.  And the ministry of the gospel is how our Lord feeds the new creation to sustain and mature our faith and life in Christ (“The Two-Faced God,” 10).

For this reason Hein is quite negative about exhortation.  He opines that, “Exhorting good works does not produce or increase them. They are empowered and increased only by the continual impact of God’s Word of forgiveness as we live and grow in Christ" (Justification: You Have It All, But You Always Need More).

The argument that “A good tree produces good fruit,” is not new in Lutheranism.  Formula of Concord Article VI was written in order to address those who were saying that while the Law convicted of sin in the conversion of individuals, it was not needed by the regenerate (this is known as the second antinomian controversy; in the first antinomian controversy, Agricola had argued that it is the Gospel rather than the Law which works repentance).  Martin Chemnitz writes about this in his Loci Theologici:


Therefore, they argue, the regenerate has no use for the Law, not even for teaching, because “His anointing will teach you all things,” 1John 2:27.  Again, Rom. 12:2, “Be transformed by the renewing of your mind, that you may approve the things which God wills,” not by encouragement or urgings because the new obedience ought to be voluntary, just as there is no need to give a good tree commandments to bear good fruit, but of itself and by its own nature it does this. They can expand on this idea in a marvelous and popular manner (2:440; emphasis mine).

The similarity to what Hein and other modern Lutherans say about the good tree is quite striking.  To be sure, there is an important difference.  Chemntiz’s opponents in the second antinomian controversy denied that the law should be spoken to Christians in any form.  Modern Lutherans like Hein are absolutely clear that sharp accusatory law (“full-strength law”) should be addressed to Christians in order to reveal their sin (second use of the law).  In this sense they are not antinomians.  However, in another way they are.  They do not believe that exhortation and paraenesis directed at the Christian has a role to play in aiding them to live like Christ.  In order to articulate this difference I have called it “soft antinomianism” which is an inability and even a refusal to preach about new obedience and good works.  It does not exhort, admonish and teach in sermons about how Christians are to live because of what Christ has done for us.  Unfortunately it has become a common problem in the Lutheranism that has come out of the second half of the twentieth century,  and is exemplified in the theology of 1517./Christ Hold Fast.

At first glance, “A good tree bears good fruit” seems like a strong argument against exhortation and paraenesis.  After all, Jesus said it.  However, beyond the observations with which I began this post, it must also be recognized that when the Lord uses this saying he is not providing a comprehensive biblical anthropology.  He is making a very specific use of a saying that is a general truth. To employ this as some kind of guiding principle about how pastors should address Christians is deeply misguided.

Sadly, the Christian is not only a good tree.  He is also a bad tree at the same time.  The Formula of Concord says, “However, since believers in this world are not perfectly renewed – the old Adam clings to them down to the grave – the battle between spirit and flesh continues in them (SD VI.18).  Therefore speech addressing the Christian must also take this reality into account.

Martin Chemnitz was a key player in the development of the Formula of Concord, and was one of the original six theologians who signed it.  It seems safe to believe that he had a good understanding of what is confessed in Article VI.  After referring to the antinomians who spoke about the Christian being a good tree, he went on to describe what he confessed and taught. He writes in the Loci Theologici:


Because in this life the renewal of the Spirit does not wholly take away our old nature, but at the same time the old and the new man remain (the outward and the inner man), therefore there is a use of the Law in the regenerate that it may contend and coerce their old man (ut arguat & coerceat vetustatem); and the beginnings of the new obedience are weak and are not supported by our whole spirit and mind.  But Rom. 7:25 shows that “with the mind I serve the law of God but with the flesh the law of sin”; and again vv. 22- 23, “I delight in the law of God in my inmost self, but I see another law ….” Therefore these weak beginnings must not only be encouraged (fovenda) by the earnest treaties of the Gospel but also fostered by the precepts, exhortations, warnings and promises of the Law (sed & praeceptis, exhortationibus, comminationibus, promissionibus Legis excitanda, urgenda).  For we experience that the new obedience is not so voluntary a thing as a good tree which brings forth its new fruit without any command or exhortation (2:441; emphasis mine).

In the third use of the law, the term "use" refers to the effect that the Law has on the hearer (the way it is received).  There is one Law and it can have different effects. In fact, because of the complexity of the sinner there can be more than one effect at the same time. This effect (this use of the law) is determined by the Holy Spirit alone as he utilizes the law to produce the effect (the use) he intends (FC SD VI.3, 11-14).  A pastor cannot decide that he is going "to do some third use preaching."


The preacher today can’t control how the Spirit will utilize the law.  When it comes to the deployment of exhortation to Christian living, we must recognize that Paul couldn’t control how the Spirit utilized the law either. And yet, Paul exhorted, admonished, and taught Christians how to live.  Formula of Concord article VI was developed on the basis of apostolic exhortation like we see in the Paul – the paraenesis which is so common in the New Testament.  Article VI explains why this language is needed, and how the Spirit utilizes it in the third use of the law.  Secure in this understanding, Lutheran preachers need to follow the apostolic example of Paul’s letters in exhorting and admonishing Christians to a life of new obedience and good works. They can do this in the knowledge that Spirit can and does utilize this exhortation in the manner confessed by Formula of Concord article VI.  Because of the inspiration of Scripture, the apostolic pattern of exhortation and admonition discussed by Formula of Concord VI in relation to the third use of the law is in fact a key Spirit provided model and pattern for addressing Christians.

For more on this subject see my article that has just been published: "Speaking like Paul and Luther: Pauline Exhortation and the Third Use of the Law." Logia: A Journal of Lutheran Theology 27 (2018): 15-25.