Mark's thoughts: Praying the Litany during Lent - A brief history and explanation 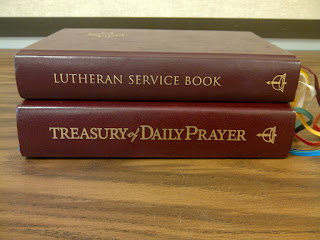 Lent is a penitential time of preparation and during Lent the Church makes a number of adjustments in the liturgy of the Divine Service as she acknowledges the unique character of this season.  Having said farewell to “alleluia” at the end of the Divine Service on the Feast of the Transfiguration of Our Lord, all uses of this word are omitted.  The Hymn of Praise, the Gloria in Excelsis is also omitted at the beginning of the service.

Lent is an ideal time use the Litany - a prayer form deeply rooted in the piety and history of the Church.  The Litany is an ancient prayer form that dates back to at least the fourth century A.D.  The name Litany is derived from a Greek word that means “prayer” or “entreaty.”  Martin Luther highly valued the Litany.  He regarded the Litany as, “next to the holy Lord’s Prayer the very best that has come to earth.”  It is because of the care and attention Luther directed towards the Litany that the Lutheran church continues to use it to this day.

The Litany is a responsive prayer form, but it can also be used by the individual Christian as he/she prays both halves.  The Litany has held a place in the Church for nearly two thousand years because of the way it combines a mood of adoration with a penitential tone.  It grounds its requests for mercy in the saving work of Jesus Christ, and while including the needs of the individual, it focuses on prayer for the needs of others.  Liturgical scholar Luther Reed summarized the character of the litany well when he wrote, “The Litany is a responsive prayer of the church, penitential in character but unselfish in its intercessions for all human need and mighty in the grasp of the grounds for divine compassion.”

The Litany as it has come to us began as a prayer form used in processions outside of the church building.  The chanted responses gave the people a way to participate and became very popular during the medieval period.  During this time the litany began to include invocations of the saints and eventually the processions of which it was part were thought to be beneficial in gaining indulgences (hundreds of days off of time in purgatory).

At the time of the Reformation, Reformed churches and those of the radical Reformation rejected the Litany altogether, just as they did with so much of the catholic (universal) heritage of the Church.  However, Martin Luther took a very different approach.  He recognized the great spiritual benefit of the Litany.  He removed the objectionable parts such as the invocation of the saints, and intercessions for the pope and the dead.  He altered the order slightly and added some material that was more concise and specific than the medieval Litany.  His work was so successful that Thomas Cranmer relied heavily on Luther’s work in producing a Litany for the Anglican Book of Common Prayer in England.

The Litany has a repeated and insistent feeling that recalls the persistent friend in Jesus’ parable about prayer (Luke 11:5-10).  It establishes a mood of adoration as it begins with the Kyrie (“Lord have mercy”) addressed to the triune God. The next section is comprised of deprecations (from the Latin deprecari, meaning to avert by prayer) which begin with the word “from…” and ask God to deliver us from various threats and dangers.

Next come the obsecrations (from the Latin obsecrare, meaning to ask on religious grounds) in which we pray “Help us good Lord.”  This petition sets forth the reason we can confidently ask for Christ’s help.  Introduced with the words, “By the mystery of…” the Litany narrates our Lord’s saving work from incarnation through ascension and sending of the Holy Spirit.  Because He was done this, we know that He will answer our prayer for help.

This is followed by the supplications, which are specific prayers we ask on behalf of ourselves.  The striking thing about them (especially when compared with the intercessions that follow) is how brief they are.  We pray, “In all time of our tribulation; in all time of our prosperity; in the  hour of death; and in the day of judgment: Help us good Lord.” We ask for God’s help in good times and bad times; in the hour of our death and on the Last Day.

The intercessions are the last section and they are the largest.  In our prayers, there is a tendency for us to focus on our own concerns.  We pray for our own needs, and if we pray for others these tend to be people who are close to us.  However, St. Paul wrote, “First of all, then, I urge that supplications, prayers, intercessions, and thanksgivings be made for all people, for kings and all who are in high positions, that we may lead a peaceful and quiet life, godly and dignified in every way. This is good, and it is pleasing in the sight of God our Savior, who desires all people to be saved and to come to the knowledge of the truth” (1 Timothy 2:1-4).  The intercessions include prayers for the Church and for people in many different situations.  This is a helpful corrective and reminder for our prayer life in general.  Perhaps the final intercession, “To forgive your enemies, persecutors, and slanderers,” is the one we need the most.  Our Lord said, “     You have heard that it was said, ‘You shall love your neighbor and hate your enemy.’ But I say to you, Love your enemies and pray for those who persecute you” (Matthew 5:43-44).  We often forget to do this, and the Litany holds up this need before us.

Having begun with the Kyrie (“Lord have mercy”), the Litany also ends with the Kyrie.  This is followed by the Lord’s Prayer and then a Collect. Treasury of Daily prayer provides a series of different collects that can be used to conclude the Litany.  If you don’t have this resource, take home the bulletin or the insert from Sunday and use the Collect of the Day printed there.

The Litany is found on pg. 288 of Lutheran Service Book and on pg. O-53 in Treasury of Daily Prayer.  I encourage you to use the Litany daily during Lent.   It will enrich your Lenten preparation in particular and your prayer life in general.