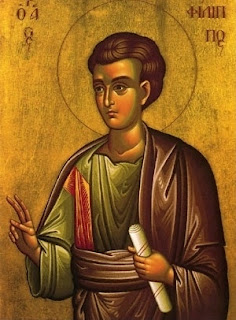 Today is the Feast of St. Philip and St. James, Apostles.  Philip was from Bethsaida and was one of the first apostles called after Peter and Andrew.  He was instrumental in bringing Nathanael to Jesus (John 1:43-51).  During Holy Week, he helped to bring inquiring Greeks to see Jesus (John 12:20-22).  According to tradition, Philip preached the Gospel in Phrygia (modern day Turkey) and died a martyr. 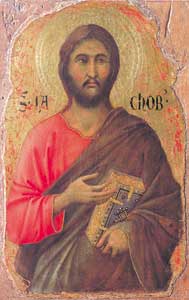 James was the son of Alphaeus and was also called “the Younger” (to distinguish him from James, the son of Zebedee).  His mother Mary was one of the women who stood at the cross of Jesus (Matthew 27:56).  There is no other mention of him in the New Testament and we do not know anything about his later work or death.

Scripture reading:
“Let not your hearts be troubled. Believe in God; believe also in me. In my Father's house are many rooms. If it were not so, would I have told you that I go to prepare a place for you? And if I go and prepare a place for you, I will come again and will take you to myself, that where I am you may be also. And you know the way to where I am going.” Thomas said to him, “Lord, we do not know where you are going. How can we know the way?” Jesus said to him, “I am the way, and the truth, and the life. No one comes to the Father except through me. If you had known me, you would have known my Father also. From now on you do know him and have seen him.”

“Truly, truly, I say to you, whoever believes in me will also do the works that I do; and greater works than these will he do, because I am going to the Father. Whatever you ask in my name, this I will do, that the Father may be glorified in the Son. If you ask me anything in my name, I will do it. (John 14:1-14 ESV)

Collect of the Day:
Almighty God, your Son revealed Himself to Philip and James and gave them the knowledge of everlasting life.  Grant us perfectly to know Your Son, Jesus Christ, to be the way, the truth, and the life, and steadfastly to walk in the way that leads to eternal life; through the same Jesus Christ, our Lord, who lives and reigns with You and the Holy Spirit, one God, now and forever.