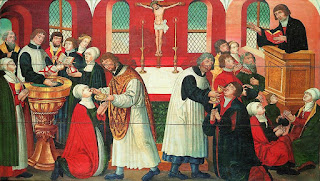 Today Surburg's blog reached 200,000 pageviews.  I want to thank everyone who has read and shared the blog since the first post on Feb. 4, 2013.  In a way that I never could have imagined, this has become a means to share material with others in the hopes it will be of use to them.  I want to thank my wife Amy and my parents Paul and Ellen who strongly encouraged me to start a blog: You were right.

Mark's thoughts: They worshipped when?!?

During the years 111-113 A.D. a Roman named Pliny served as the appointed governor over the area Pontus-Bythinia in what is today Turkey.  Although communication was by our standards painfully slow, governors like Pliny constantly consulted the Roman emperor by letter and asked for his decisions and judgments on matters.  A large part of the job of a Roman emperor was to answer this endless correspondence that came in from all over the empire.

In Pontus-Bythinia Pliny encountered a group that prompted him to write to the Emperor Trajan.  They were called “Christians” and Pliny was not exactly sure how to deal with them.  In writing his letter Pliny provided the following description:


They asserted, however, that the sum and substance of their fault or error had been that they were accustomed to meet on a fixed day before dawn and sing responsively a hymn to Christ as to a god, and to bind themselves by oath, not to some crime, but not to commit fraud, theft, or adultery, not falsify their trust, nor to refuse to return a trust when   called upon to do so. When this was over, it was their custom to depart and to assemble again to partake of food--but ordinary and innocent food. Even this, they affirmed, they had ceased to do after my edict by which, in accordance with your instructions, I had forbidden political associations. Accordingly, I judged it all the more necessary to find out what the truth was by torturing two female slaves who were called deaconesses. But I discovered nothing else but depraved, excessive superstition. (Letters 10.96-97)


Pliny provides us with a very early description of Christian practice.  He says that the Christians were “accustomed to meet on a fixed day before dawn.”  From the New Testament and other early Christian evidence, we know that this day was Sunday.  What we want to note here is that they met “before dawn.”  Pliny says that they also used to meet in the evening of Sunday, but had ceased to do this since on Trajan’s instruction Pliny had placed great restrictions on all of these kinds of gatherings out of fear they might provide the setting for political agitation.

About fifty years later a Christian named Justin Martyr wrote a defense of Christianity to the Roman emperor.  He provided a description of Christian worship (the earliest that we have) and reported:

On the day named after the sun, all who live in city or countryside assemble. The memoirs of the apostles or the writings of the prophets are read for a long as time allows … It is on Sunday that we all assemble, because Sunday is the first day: the day on which God transformed darkness and matter and created the world, and the day on which Jesus Christ our Savior rose from the dead.  He was crucified on the eve of Saturn’s day, and on the day after, that is, on the day of the sun, he appeared to his apostles and disciples and taught them what we have now offered for your examination (Apology I, 67).

The reason for this was that Sunday was a regular work day.  As Justin describes, because Sunday was when Christ rose from the dead, Christians worshipped in the morning on the first day of the week when the resurrection was made known (Matthew 28:1).  Yet this theologically motivated choice ran headlong into a practical reality: Sunday was a work day in the ancient world.  In order to worship on Sunday morning, it was necessary to celebrate the Divine Service before going to work.  Sunday for a second century Christian meant getting up before dawn, attending worship, and then going on to a full day of work.

In 313 A.D. the Emperor Constantine acted to end the persecution of Christians.  In his own growing commitment to Christ he took actions that favored the Church but which could also be understood by pagans as honoring their beliefs.  He passed laws that paid homage to Sunday and could be seen as honoring Christ and honoring the sun god.  The first law passed in March 321 said that: “All judges and the people of the towns and all craftsmen are to remain at rest on the venerable day of the sun.”  Only agricultural work could be exempted from this in order to take advantage of the weather.  In this way, Sunday became a day when no work was done, so that Christians were free to worship with ease.

The practice of Christians before the legalization of Christianity and the promulgation of Constantine’s laws prompts us to reflect upon our own attitude toward Sunday and the Divine Service.  In the Small Catechism the explanation to the Third Commandment says: “We should fear and love God so that we do not despise preaching and his word, but hold it sacred and gladly hear and learn it.”  Would we be willing to get up before dawn in order to attend the Divine Service and then head off to a day of work? Do we consider the Lord Jesus and his Means of Grace so precious that we are willing to put them before other things in life?


Jesus said: “If anyone would come after me, let him deny himself and take up his cross and follow me. For whoever would save his life will lose it, but whoever loses his life for my sake will find it” (Matthew 16:24-25 ESV).  As the era of the post-Christian world continues to advance in our culture, we are encountering more and more situations that reflect the experience of our early Christian forefathers.  Sporting events, school activities and a growing list of other endeavors are scheduled for Sunday morning.  The faithful practice of the Christian faith will require an ever greater commitment.


It will require sacrifice in order put Jesus Christ first as the Lord of our life.  The saints who have gone before provide both a model and an encouragement.  They show us what Christians have done in order to be faithful, and they demonstrate how by his grace God enabled them to do this.  On Feb. 12, 304 thirty one men and eighteen women were arrested for illegal assembly during the Great Persecution of Emperor Diocletian.  They appeared before the Roman proconsul in Carthage who accused them of disobeying the imperial edicts. In the trial that occurred before they were killed as martyrs, Emeritus, a lector confessed that he had been involved in Christian worship and that it had been held in his house. He said, “Yes, it was in my house that we celebrated the Lord’s Day.  We cannot live without celebrating the Lord’s Day” (Bibliographia hagiographica Latina, no. 7492). 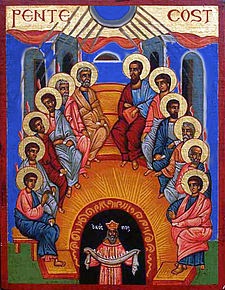 During the octave (the eight days) in which we celebrate the Feast of Pentecost, today is Pentecost Tuesday.  We continue to rejoice in the gift of the Holy Spirit, whom Christ poured out upon the Church on Pentecost.  The text for today tells of how the Spirit dramatically showed that the Gospel was to be preached to non-Jews in Palestine - the Samaritans.

Scripture reading:
Now when the apostles at Jerusalem heard that Samaria had received the word of God, they sent to them Peter and John, who came down and prayed for them that they might receive the Holy Spirit, for he had not yet fallen on any of them, but they had only been baptized in the name of the Lord Jesus. Then they laid their hands on them and they received the Holy Spirit (Acts 8:14-17).

Collect of the Day:
Almighty and ever-living God, You fulfilled Your promise by sending the gift of the Holy Spirit to unite the disciples of all nations in the cross and resurrection of Your Son, Jesus Christ.  By the preaching of the Gospel spread this gift to the ends of the earth; through the same Jesus Christ, our Lord, who lives and reigns with You and the Holy Spirit, one God, now and forever.

Posted by Surburg's blog at 7:26 AM No comments:

Posted by Surburg's blog at 4:44 AM No comments: