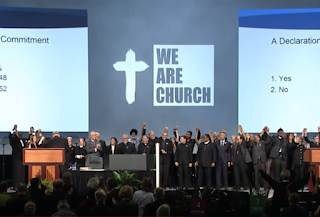 In what is most likely the first letter written by the apostle Paul, and also the first book written of what would become the New Testament, the apostle tells the Thessalonians:

For not only has the word of the Lord sounded forth from you in Macedonia and Achaia, but your faith in God has gone forth everywhere, so that we need not say anything. For they themselves report concerning us the kind of reception we had among you, and how you turned to God from idols to serve the living and true God, and to wait for his Son from heaven, whom he raised from the dead, Jesus who delivers us from the wrath to come. (1Thessalonians 1:8-10)

In this brief statement Paul makes several explicit claims.  First, he says that there is a living and true God, and that all of the gods and goddesses of the Greco-Roman world in Thessalonica are mere idols.  They are not the living and true God, and so they really are nothing more than statues and images. Second, he says that God raised Jesus his Son from the dead and that the Thessalonians now await his return from heaven.  Paul points them to Son of God who died, was raised from the dead, and ascended into heaven.   Third, the apostle says that Jesus is the One who delivers us from the wrath to come on the Last Day.

It is a brief and compressed statement about what God has done in his Son Jesus Christ, but we know what Paul had told the Thessalonians from the reminder he gave to the Corinthians: “For I delivered to you as of first importance what I also received: that Christ died for our sins in accordance with the Scriptures, that he was buried, that he was raised on the third day in accordance with the Scriptures” (1 Corinthians 15:3-4).  Paul had told them that Jesus died for our sins. It was their sins that threatened them with receiving God’s wrath on the Last Day.  Yet by Jesus Christ’s death and resurrection they were now delivered from this wrath.  Paul, of course, explains elsewhere in great detail that all people sin and so deserve God’s judgment (Romans 1:18-3:20), but receive justification through faith in Jesus Christ who was the sacrifice for sin (Romans 3:21-26).

These are basic and essential biblical truths revealed by God first in the saving action of the death and resurrection of Jesus Christ, and then in the proclamation of his Word.  Paul says later in the 1 Thessalonians: “And we also thank God constantly for this, that when you received the word of God, which you heard from us, you accepted it not as the word of men but as what it really is, the word of God, which is at work in you believers” (2:13). The apostle left no doubt about the source or authority of the Gospel he declared.  It was the Word of God.

We must never lose sight of the fact that God has revealed his will in Holy Scripture. What God says in his Word is true, even if people don’t want to hear it. The rejection of the authority of God’s inspired and inerrant Word has caused the other major Lutheran church body, the Evangelical Lutheran Church in America (ELCA) to ordain women as pastors, to enter into full fellowship with church bodies that deny the biblical teaching about Holy Baptism and the Sacrament of the Altar , and to accept homosexuality. Once begun, this process affects all areas of theology as a church seeks to keep in step with the culture.  Ultimately, it must strike the very heart of Gospel.

In August the ELCA adopted, “A Declaration of Inter-Religious Commitment: A policy statement of the Evangelical Lutheran Church in America.” While the statement affirms that the ELCA believes in sharing the Gospel of Jesus Christ with others, it also included language that calls into question why this is even needed. The document states:

The Lutheran tradition offers other reasons for caution about our claims to know. Luther said that no human could know another person’s relationship with God. What that person says or does gives us clues, but, ultimately, we cannot see into someone else’s heart (Luther, Bondage of the Will). Similarly, Luther insisted that we cannot know the inner workings of God. God has revealed God’s attitude toward us, overall purpose, and character, but the inner workings of God remain hidden. Hence, we must be careful about claiming to know God’s judgments regarding another religion or the individual human beings who practice it. (632-641)

It is true that no one can look into another’s heart.  It is also true that while God has revealed much to us in Scripture, we can in no way claim to understand the inner workings of God and his will.  However, it does not follow from this that “we must be careful about claiming to know God’s judgments regarding another religion or the individual human beings who practice it.”

The apostle Paul, the authorized representative of Jesus Christ, had no doubt about God’s judgments regarding other religions and those who practice them.  He said that those who follow other religions did not know the living and true God.  He said that apart from faith in Jesus Christ they remained in their sins and would receive the wrath of God’s judgment on the Last Day.  The exclusive claims about Christ may offend other religions and the world, but it was Jesus who said, "I am the way, and the truth, and the life. No one comes to the Father except through me” (John 14:6).  Likewise, the apostle Peter said about Jesus: “And there is salvation in no one else, for there is no other name under heaven given among men by which we must be saved" (Acts 4:12).

The continuing challenge for the Lutheran Church - Missouri Synod will be to listen to God’s authoritative Word, and then to say what it says.  This will offend the world, and will even offend many people who identify themselves as Christians.  But it is only in this way that we can remain faithful to our Lord and secure in his truth which grants forgiveness and salvation.

Sermon for the Fourteenth Sunday after Trinity - Lk 17:11-19

Sermon for the Thirteenth Sunday after Trinity - Lk 10:23-37

Today is Holy Cross Day.  Holy Cross Day commemorates the cross of Christ and the dedication of the Church of the Holy Sepulchre in Jerusalem that was built over the site of the crucifixion and tomb.  Emperor Constantine’s mother, Helena, was believed to have found the original cross on September 14, 320.  In conjunction with the dedication of Church of the Holy Sepulchre, Constantine made the festival day official in 335.  The day is called “The Exaltation of the Holy Cross” in the Eastern churches and the Roman Catholic church.  In the Byzantine church is it one of the twelve great feast days.

Scripture reading:
For the word of the cross is folly to those who are perishing, but to us who are being saved it is the power of God. For it is written, “I will destroy the wisdom of the wise, and the discernment of the discerning I will thwart.” Where is the one who is wise? Where is the scribe? Where is the debater of this age? Has not God made foolish the wisdom of the world? For since, in the wisdom of God, the world did not know God through wisdom, it pleased God through the folly of what we preach to save those who believe.  For Jews demand signs and Greeks seek wisdom, but we preach Christ crucified, a stumbling block to Jews and folly to Gentiles, but to those who are called, both Jews and Greeks, Christ the power of God and the wisdom of God. For the foolishness of God is wiser than men, and the weakness of God is stronger than men.
1 Corinthians 1:18-25

Collect of the Day:
Merciful God, Your Son, Jesus Christ, was lifted high upon the cross that He might bear the sins of the world and draw all people to Himself.  Grant that we who glory in His death and resurrection may faithfully heed His call to bear the cross and follow Him, who lives and reigns with You and the Holy Spirit, one God, now and forever.

Posted by Surburg's blog at 4:46 AM No comments: