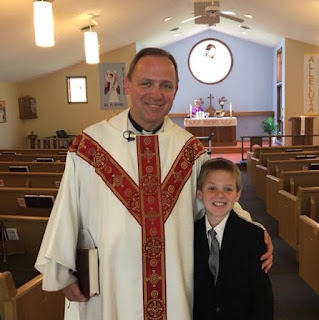 Martin Luther said about the Sacrament of the Altar, “This sacrament is the Gospel.” He meant that in the Sacrament of the Altar we encounter the incarnation, death and resurrection of Jesus Christ for our salvation.  It is the incarnate Lord, true God and true man, who works the miracle of giving us his true body and blood to eat and to drink. In the Sacrament. He gives us his body and blood, given and shed on the cross for us for the forgiveness of our sins.  And it is the risen Lord who continues to do this as He gives us the guarantee of our own resurrection and eternal life with Him in the new creation.

The Divine Service every Sunday reaches its culmination in the celebration of the Sacrament of the Altar.  The entire second half of the service has been constructed in a way that centers on Christ present for us in his body and blood.  Catechesis and preaching regularly call attention to Christ’s gift of the Sacrament.

It is not surprising therefore that children take notice of the Sacrament and want to receive the body and blood of Christ.  Or at least it shouldn’t be.  However, I must confess that this was a realization that dawned on me slowly during my first decade in the ministry.  I have learned that when you teach and preach about the Sacrament, children want to receive it.  It is not as if they are any less able to understand the gift.  It is after all a mystery that we all receive in faith.  Based on what our Lord has said about children and faith, they may even find it easier to believe than adults.

One of the reasons we are slow to think about children receiving the Sacrament is that in our experience of the Lutheran Church, confirmation after eighth grade has marked the time for first communion.  We have been trained to think that elementary school children are not suitable recipients of the Sacrament.

I have since learned that the awkward situation exists because it does not reflect the original practice of the churches that confessed Lutheran theology. During the sixteenth century and most of the seventeenth centuries, there was nothing like what we now know as “confirmation” in the Lutheran Church.  The medieval Church had considered confirmation to be a sacrament which bestowed an additional grace to the baptized to aid them in the Christian life.   Luther and the reformers rejected this view since Scripture nowhere says that Christ instituted confirmation and does not make any promises that grace and forgiveness are received through it.

Catechesis went on in Lutheran congregations through catechetical sermons and catechetical instruction for the young, and through instruction at home.  When a child appeared to have sufficient understanding, the pastor examined the child to determine whether he or she was ready.  Parents and sponsors were often the ones who initiated this step.  Children who began receiving the Sacrament were usually between seven and twelve years old.

There was no “rite of confirmation.”  Confirmation as we know it is the result of later developments that found their origin in the non-Lutheran Martin Bucer. He set in motion a trend in the Lutheran Church that emphasized a personal confession of faith and a vow of obedience to life in the Church.  The trend called Pietism emphasized the individual subjective and emotional commitment.  It was its successor, Rationalism, that made confirmation an established part of the Lutheran Church during the eighteenth century.  Confirmation was tied to the school system and signaled for most children the end of schooling and the eligibility to give an oath, be married in the church or become a sponsor.  A rite that had no biblical mandate or promise became a special family event on par with baptism and marriage.  Confirmation took place at an older age, often between fourteen and sixteen (for this history, see: Arthur C. Repp, Confirmation in the Lutheran Church, 13-137)

Because children often want to receive the Sacrament, and because for almost two hundred years the Lutheran Church did not deny it to them, my congregation allows children to commune who are prepared to receive it.  When an elementary school age child wishes to receive the Sacrament, and the child’s parents believe he or she is mature enough to do so, they can take steps to prepare them for the Sacrament.  The primary focus of this process is in the home.  Working with their parents, children learn by heart the Catechism (the Ten Commandments, Apostles’ Creed, Lord’s Prayer, and institution texts for Holy Baptism, Holy Absolution and the Sacrament of the Altar).  They learn the basic meaning of the six parts using the Small Catechism.  Parents and children attend “Learn by Heart” on Wednesday nights at 7:00 p.m. so that in the catechetical service (Lutheran Service Book, Service of Prayer and Preaching, pg. 260) they can receive instruction in the basic meaning of the Catechism.  When a child has completed all six parts, if the parents think he or she is ready, we meet together to examine the child.  If the child demonstrates sufficient preparation, he or she is acknowledged as ready to receive the Sacrament using the Rite of First Communion Prior to Confirmation which is found in the Lutheran Service Book Agenda (25).

This does not mean that Catechesis and Confirmation as it has been practiced at Good Shepherd has been changed in any way.  Children who wish to commune are expected to have an understanding that matches their age and ability. Catechesis in seventh and eighth grade continues to be the time when they attain the deeper knowledge and understanding that we expect of confessing congregation members, and leads to Confirmation. Youth who began communing as a child but then do not take part in Catechesis are not allowed to continue to commune because they are refusing to learn about the faith confessed by those communing at Good Shepherd’s altar.

This practice of First Communion prior to Confirmation makes the opportunity to commune available to children.  There is no requirement or expectation.  Parents and children who wish to wait until Catechesis in seventh and eighth grade are free to do so.  Our goal as a congregation is to make Christ’s gift of the Sacrament available to children who wish to receive it, and to foster learning about the faith in the home.  I have seen how the practice of earlier communion generates a desire for and appreciation of the Sacrament of the Altar among children and youth.  Their willingness to receive Catechesis provides an early period of instruction when they are very open to learning and excited about doing it.  This Catechesis also involves their families and fosters work with the Small Catechism at home. At the same time, it lays a foundation upon which later Catechesis can build.