Mark's thoughts: Why do Lutherans have Confirmation on Palm Sunday? 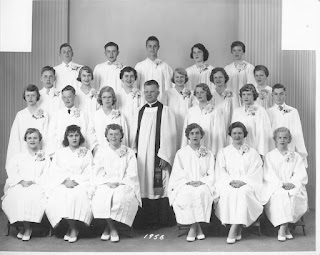 This Sunday in many Lutheran congregations, eighth grade youth will don white gowns (perhaps accompanied by a kind of red stole) and take part in the Lutheran Rite of Confirmation.  This is a day to which Lutherans assign great importance as they give gifts to the confirmands and hold confirmation receptions.

In many congregations it is a long standing tradition that Palm Sunday is Confirmation Sunday. Everyone knows that Confirmation takes place on this day.  Woe to the pastor who attempts to hold Confirmation on another Sunday!  But why is this so?  What is the liturgical or theological connection between Palm Sunday and Confirmation that has prompted this long established practice?

The answer is that there is none.  Arthur Repp explains in Confirmation in the Lutheran Church that during the age of Rationalism in the 18th century, Confirmation became fixed on Palm Sunday for reasons completely unrelated to liturgy or theology:


While the dates still varied according to locality, there was a tendency for them to cluster around Holy Week, for many of the schools closed for spring planting about that season or with Easter.  In time Palm Sunday or Maundy Thursday came to be designated by law, and great uniformity in the closing of the school year then followed” (pg. 82).

This trend continued during the 19th century in American Lutheranism.  Repp reports:


Since confirmation instruction proved to be more than simply a preparation for first Communion and became an opportunity to concentrate on the catechumen’s general religious instruction with confirmation as a sort of terminal point, the tendency to advance the age to 13 and 14 prevailed.  This was especially true when confirmation instruction was associated with the close of school, as had been the case in Europe. Congregations that conducted parish school, especially in rural areas, followed the European pattern of closing the school term at Easter.  A child’s confirmation therefore coincided with his graduation from grammar school (pg. 126)

What immigrants had experienced in Europe, they expected here in the United States:


In Europe, where confirmation was closely associated with the school system, confirmation was customarily held on Palm Sunday or during Holy Week, since Easter usually marked the end of the school term.  Immigrants from Europe after the 1830’s generally favored the same time of year for confirmation in the United States (pg. 128).

So why do Lutherans hold Confirmation on Palm Sunday?  It has nothing to do with the Church Year or lectionary or theology.  It is because school in Europe ended around the time of Holy Week to order to coincide with the spring planting.  The end of the school year and graduation from grammar school occurred at Holy Week and so Confirmation took place on Palm Sunday.

What is more many of the things that people consider to be the “truly Lutheran” Confirmation practices were generated by theology that is opposed to Lutheran teaching.  Many of the things people associate with Confirmation in the Lutheran Church today arose in the era of Rationalism. During this period there was a general trend that downplayed the miraculous.  The sacraments by definition go beyond the limits of reason and so if they could not be eliminated entirely, church leaders attempted to minimize them as much as possible (it is in this period that every Sunday celebration of the Sacrament of the Altar finally ends).  Friedrich Schleirmacher (1768-1834) taught that Confirmation is the second, and more important, half of Baptism.  After all, Confirmation was the reasoned statement by an individual who was now making a solemn commitment.

It is in this period in particular that Confirmation came of age as the institution that we know today. Rationalism played up Confirmation as a major event.  It was described in words like: “the great festival of youth”; “the festival of human nature”; “the most important day of a child’s life”; “the festival that cannot be made solemn enough;” “like another birthday for children and a holy festival for the congregation.”

During this time the Examination was separated from Confirmation as separate event.  The vow in connection with the confession of faith became a dramatic moment in the Rite of Confirmation and was often described as an “oath.”  After the vow the pastor spoke a special Bible passage or hymn stanza (Einsegnungwünsche). This gave rise to practice of giving individual memory verses to the confirmands.  Confirmation took center stage as a cultural and family event.  Sentimentalism became a driving force.

Of course, these developments in Confirmation were all done for the purpose of minimizing baptism – something that is about as un-Lutheran as you can get!  The efforts of Rationalism succeeded.  Confirmation has achieved a remarkable status in the culture of the Lutheran church which places tremendous emphasis on Confirmation as a terminal event.  Even parents who are unfaithful in attendance at the Divine Service and catechesis of their children consider Confirmation to be of great importance.  Parents will make the effort needed to see their youth are confirmed. Confident that they have done their spiritual duty as parents, they then return to unfaithful attendance at the Divine Service.  Naturally, confirmed youth whose behavior was guided by the parents before Confirmation, return with their parents to the same behavior. Confirmation as presently practiced allows unfaithful parents to feel assured that they have done their spiritual duty – the kids have been confirmed!

These results should not be surprising.  It really could not turn out any other way.  A consideration of Confirmation's history reveals that from the very beginning it has been generated by a false theology.  At different stages Pietism and then Rationalism have built upon this foundation in the effort to promote theological views that are contrary to Lutheranism.

Perhaps the Wittenberg Lutherans of Luther's day knew what they were doing. They never had any kind of Rite of Confirmation. This was the case in the majority of congregations in Germany and Scandanavia during the 17th century.  It was Pietism that spread the practice of Confirmation starting at the end of the 17th century. By the mid-18th century it had spread to the majority of Germany and then to the final holdouts at the beginning of the 19th century as Rationalism finished what Pietism had started. Confirmation is the gift of Pietism and Rationalism to the Lutheran Church.