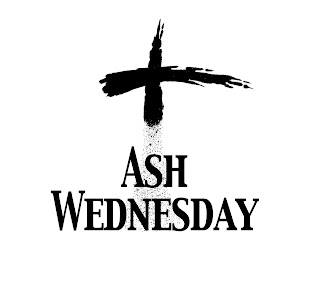 Today is Ash Wednesday, the beginning of the season of Lent.  During Lent we repent of our sins and rededicate our lives to living out our baptism into Christ’s death and resurrection.

Scripture reading:
“Yet even now,” declares the LORD, “return to me with all your heart, with fasting, with weeping, and with mourning; and rend your hearts and not your garments.” Return to the LORD your God, for he is gracious and merciful, slow to anger, and abounding in steadfast love; and he relents over disaster. Who knows whether he will not turn and relent, and leave a blessing behind him, a grain offering and a drink offering for the LORD your God? Blow the trumpet in Zion; consecrate a fast; call a solemn assembly; gather the people. Consecrate the congregation; assemble the elders; gather the children, even nursing infants. Let the bridegroom leave his room, and the bride her chamber. Between the vestibule and the altar let the priests, the ministers of the LORD, weep and say, “Spare your people, O LORD, and make not your heritage a reproach, a byword among the nations. Why should they say among the peoples, ‘Where is their God?’” Then the LORD became jealous for his land and had pity on his people. The LORD answered and said to his people, “Behold, I am sending to you grain, wine, and oil, and you will be satisfied; and I will no more make you a reproach among the nations. (Joel 2:12-19)

Collect of the Day:
Almighty and everlasting God, You despise nothing You have made and forgive the sins of all who are penitent.  Create in us new and contrite hearts that lamenting our sins and acknowledging our wretchedness we may received from You full pardon and forgiveness; through Jesus Christ, Your Son, our Lord, who lives and reigns with You and the Holy Spirit, one God, now and forever. 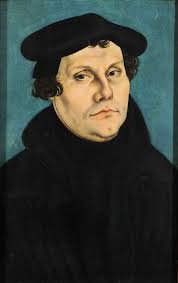 Today we remember and give thanks for Martin Luther, Doctor and Reformer.  Martin Luther, born on November 10, 1483, in Eisleben, Germany, initially began studies leading toward a degree in law. However, after a close encounter with death, he switched to the study of theology, entered an Augustinian monastery, was ordained a priest in 1505, and received a doctorate in theology in 1512. As a professor at the newly-established , his scriptural studies led him to question many of the church's teachings and practices, especially the selling of indulgences. His refusal to back down from his convictions resulted in his excommunication in 1521. Following a period of seclusion at the Wartburg castle, Luther returned to Wittenberg, where he spent the rest of his life preaching and teaching, translating the Scriptures, and writing hymns and numerous theological treatises. He is remembered and honored for his lifelong emphasis on the biblical truth that for Christ's sake God declares us righteous by grace through faith alone. He died on February 18, 1546, while visiting the town of his birth.

Collect of the Day:
O God, our refuge and our strength, You raised up Your servant Martin Luther to reform and renew Your Church in the light of Your living Word, Jesus Christ, our Lord.  Defend and purify the Church in our own day, and grant that we may boldly proclaim Christ’s faithfulness unto death and His vindicating resurrection, which You made known to Your servant Martin through Jesus Christ, our Savior, who lives and reigns with You and the Holy Spirit, one God, now and forever. 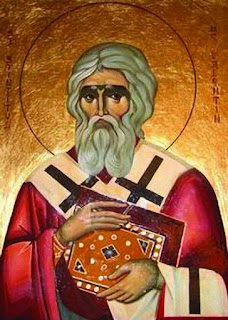 Today we remember and give thanks for Valentine, Martyr.  A physician and priest living in Rome during the rule of the Emperor Claudius, Valentine become one of the noted martyrs of the third century. The commemoration of his death, which occurred in the year 270, became part of the calendar of remembrance in the early church of the West. Tradition suggests that on the day of his execution for his Christian faith, he left a note of encouragement for a child of his jailer written on an irregularly-shaped piece of paper. This greeting became a pattern for millions of written expressions of love and caring that now are the highlight of Valentine's Day in many nations.

Collect of the Day:
Almighty and everlasting God, You kindled the flame of Your love in the heart of Your holy martyr Valentine.  Grant to us, Your humble servants, a like faith and the power of love, that we who rejoice in Christ’s triumph may embody His love in our lives; through Jesus Christ, our Lord, who lives and reigns with You and the Holy Spirit, one God, now and forever. 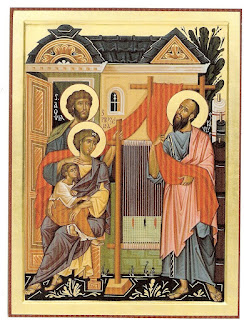 Today we remember and give thanks for Aquila, Priscilla, Apollos.  Aquila and his wife Priscilla  (Prisca), Jewish contemporaries of St. Paul, traveled widely. Because of persecution in , they went to where they met the apostle Paul, who joined them in their trade of tentmaking (Acts 18:1-3). They, in turn, joined him in his mission of sharing the Christian Gospel. The couple later traveled with Paul from to (Acts 18:18), where the two of them established a home that served as hospitality headquarters for new converts to Christianity. 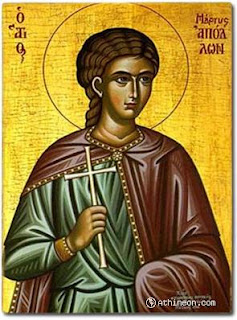 Apollos received further instruction in the faith from and Priscilla. An eloquent man, Apollos “spoke with burning enthusiasm and taught accurately the things concerning Jesus” (Acts 18:25). He later traveled from Corinth to the province of Achaia, where he “showed by the Scriptures that the Messiah is Jesus” (Acts 18:28).  Aquila, Priscilla, and Apollos are all remembered and honored for their great missionary zeal.
Collect of the Day:
Triune God, whose very name is holy, teach us to be faithful hearers and learners of Your Word, fervent in the Spirit as Apollos was, that we may teach it correctly against those who have been led astray into falsehood and error and that we might follow the example of Aquila and Priscilla for the good of the Church You established here and entrusted to our humble care; for You, O Father, Son, and Holy Spirit, live and reign, one God, now and forever. 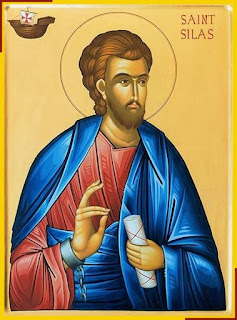 Today we remember and give thanks for Silas, Fellow Worker of St. Peter and St. Paul.  Silas was chosen by Paul (Acts 15:40) to accompany him on his second missionary journey from Antioch to Asia Minor and Macedonia. Silas, also known as Silvanus, was imprisoned with Paul in Philippi and experienced the riots in Thessalonica and Berea. After rejoining Paul in Corinth, he apparently remained there for an extended time.  Sometime later he apparently joined the Apostle Peter, likely serving as Peter’s secretary (1 Peter 5:12).  Tradition says that Silas was the first bishop at Corinth.

Collect of the Day:
Almighty and everlasting God, Your servant Silas preached the Gospel alongside the apostles Peter and Paul to the peoples of Asia Minor, Achaia and Macedonia.  We give You thanks for raising up in this and every land evangelists and heralds of Your kingdom, that the Church may continue to proclaim the unsearchable riches of our Savior, Jesus Christ, who lives and reigns with You and the Holy Spirit, one God, now and forever.