How do you recognize "radical Lutheranism"? 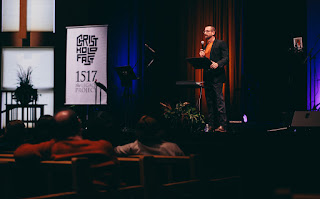 Todd Wilken, host of Issues, Etc., has shown great insight and skill in analyzing trends in the Church and culture.  I appreciate his ability to break things down and clearly present the underlying beliefs and principles.  He has done this with the trend present today that has often been called "radical Lutheranism."

The term is really a misnomer, because this trend does not confess the same theology as the Book of Concord.  However, most who advance this theology claim to be Lutheran and frequently appeal to Martin Luther.  They use Lutheran theological language and emphasize themes that are very familiar to Lutherans.

Wilken has developed a list of points that describe the theology of radical Lutheranism and help to identify it.  The more I work with this subject, the more I appreciate how insightful and accurate these points truly are:


The teachings of Radical Lutheranism can be recognized by any combination of the following ideas:

1. Sin is reduced to self-justification. The only thing intrinsically sinful about any thought, word or deed is that it is an attempt to justify oneself before God.

3. The Christian's struggle against sin is described as, at best futile, or merely an attempt at self-justification.

5. Contrition over sin is assumed, even in unbelievers. People are generally assumed to have a knowledge of, and guilty conscience over their sin.

6. The Law is confused with the pain and trouble of living in a fallen world. The Law may be described as any bad situation or evil occurrence in life.

9. Christian cooperation in Sanctification is depicted as resisting, rather than cooperating with the Holy Spirit.

11. The Law itself is viewed as the source of legalism, rather than man's sinful misuse of it.

12. Scripture's warnings against falling away from the faith are minimized or ignored.

13. Scripture is often searched to find the sinner, rather than the Savior.

14. The sins of Biblical figures are exaggerated or sensationalized.

15. Teaching is often guided by a reaction to the errors of moralistic evangelicalism, rather than God's Word or the Lutheran Confessions.

16. Man's sinful condition is described as though a person's sin qualifies him to receive Grace, rather than Grace being without qualification or condition in man.

17. The effects of the Law are attributed to the Gospel.

18. The Law may be avoided to such and extent that the Gospel is pressed into service to do the Law's work (produce repentance, instruction in good works through "Gospel imperatives”).

19. The Gospel is sometimes replaced with "We're all sinners, who am I to judge?"