Sermon for the Fourth Sunday after the Epiphany - Rom 8:18-23

Posted by Surburg's blog at 4:54 AM No comments: 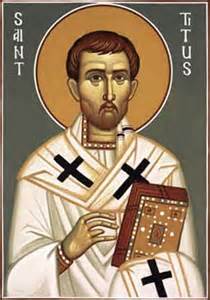 Today is the Feast of  St. Titus, Pastor and Confessor.  Titus was a Gentile who was a trusted co-worker of St. Paul in Greece, Asia Minor (modern day Turkey) and on the island of Crete.  He assisted Paul in the collections for the Church in Jerusalem (2 Corinthians 8:3-6) and was instructed by Paul to organize the church on Crete (Titus 1:4-5).  According to tradition, Titus returned to Crete where he served as bishop until he died at the end of the first century A.D.

Scripture reading:
Paul, a servant of God and an apostle of Jesus Christ, for the sake of the faith of God's elect and their knowledge of the truth, which accords with godliness, in hope of eternal life, which God, who never lies, promised before the ages began and at the proper time manifested in his word through the preaching with which I have been entrusted by the command of God our Savior;

To Titus, my true child in a common faith: Grace and peace from God the Father and Christ Jesus our Savior.

This is why I left you in Crete, so that you might put what remained into order, and appoint elders in every town as I directed you— if anyone is above reproach, the husband of one wife, and his children are believers and not open to the charge of debauchery or insubordination. For an overseer, as God's steward, must be above reproach. He must not be arrogant or quick-tempered or a drunkard or violent or greedy for gain, but hospitable, a lover of good, self-controlled, upright, holy, and disciplined. He must hold firm to the trustworthy word as taught, so that he may be able to give instruction in sound doctrine and also to rebuke those who contradict it. (Titus 1:1-9)

Collect of the Day:
Almighty God, you called Titus to the work of pastor and teacher.  Make all shepherds of Your flock diligent in preaching Your holy Word so that the whole world may know the immeasurable riches of our Savior, Jesus Christ, who lives and reigns with You and the Holy Spirit, one God, now and forever.

Feast of the Conversion of St. Paul 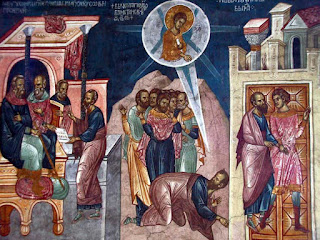 Today is the Feast of the Conversion of St. Paul.  First named Saul, Paul was a Pharisee from Tarsus who came to live in Jerusalem.  He was a rising star in the Judaism of his day and was so zealous for the faith as he understood it that he actively persecuted the Church (Galatians 1:11-24).  As he travelled to Damascus to persecute the Church there, the risen Lord Jesus appeared to Paul and as a result of this, Paul became a believer and was baptized (Act 9).  Not one of the original twelve apostles, because he was called directly by the risen Christ, Paul was also designated as an apostle.  He was active in proclaiming the Gospel to the Gentiles as he went on at least three missionary journeys to Asia Minor and Greece.  Because he had persecuted Christ’s Church, Paul considered his call and conversion to be a dramatic demonstration of God’s grace, love and forgiveness (1 Timothy 1:12-17).

Scripture reading:
But Saul, still breathing threats and murder against the disciples of the Lord, went to the high priest and asked him for letters to the synagogues at Damascus, so that if he found any belonging to the Way, men or women, he might bring them bound to Jerusalem. Now as he went on his way, he approached Damascus, and suddenly a light from heaven flashed around him. And falling to the ground he heard a voice saying to him, “Saul, Saul, why are you persecuting me?” And he said, “Who are you, Lord?” And he said, “I am Jesus, whom you are persecuting. But rise and enter the city, and you will be told what you are to do.” The men who were traveling with him stood speechless, hearing the voice but seeing no one. Saul rose from the ground, and although his eyes were opened, he saw nothing. So they led him by the hand and brought him into Damascus. And for three days he was without sight, and neither ate nor drank.

Now there was a disciple at Damascus named Ananias. The Lord said to him in a vision, “Ananias.” And he said, “Here I am, Lord.” And the Lord said to him, “Rise and go to the street called Straight, and at the house of Judas look for a man of Tarsus named Saul, for behold, he is praying, and he has seen in a vision a man named Ananias come in and lay his hands on him so that he might regain his sight.” But Ananias answered, “Lord, I have heard from many about this man, how much evil he has done to your saints at Jerusalem. And here he has authority from the chief priests to bind all who call on your name.” But the Lord said to him, “Go, for he is a chosen instrument of mine to carry my name before the Gentiles and kings and the children of Israel. For I will show him how much he must suffer for the sake of my name.” So Ananias departed and entered the house. And laying his hands on him he said, “Brother Saul, the Lord Jesus who appeared to you on the road by which you came has sent me so that you may regain your sight and be filled with the Holy Spirit.” And immediately something like scales fell from his eyes, and he regained his sight. Then he rose and was baptized; and taking food, he was strengthened.

For some days he was with the disciples at Damascus. And immediately he proclaimed Jesus in the synagogues, saying, “He is the Son of God.” And all who heard him were amazed and said, “Is not this the man who made havoc in Jerusalem of those who called upon this name? And has he not come here for this purpose, to bring them bound before the chief priests?” But Saul increased all the more in strength, and confounded the Jews who lived in Damascus by proving that Jesus was the Christ (Acts 9:1-22).

Collect of the Day:
Almighty God, You turned the heart of him who persecuted the Church and by his preaching caused the light of the Gospel to shine throughout the world.  Grant us ever to rejoice in the saving light of Your Gospel and, following the example of the apostle Paul, to spread it to the ends of the earth; through Jesus Christ, Your Son, our Lord, who lives and reigns with You and the Holy Spirit, one God, now and forever.

Posted by Surburg's blog at 6:27 AM No comments: 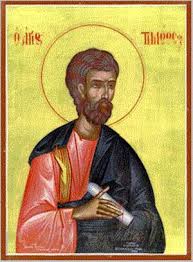 Today is the Feast of St. Timothy, Pastor and Confessor.  Timothy was the son of a Gentile father and Jewish mother whose mother and grandmother were Christians.  St. Paul met Timothy on his second missionary journey and Timothy became a trusted co-worker who engaged in mission work in Greece and Asia Minor (modern day Turkey).  According to tradition, after Paul’s death, Timothy went to Ephesus, where he served as bishop and was martyred when he was beaten to death by a mob of pagans.

Scripture reading:
But as for you, O man of God, flee these things. Pursue righteousness, godliness, faith, love, steadfastness, gentleness. Fight the good fight of the faith. Take hold of the eternal life to which you were called and about which you made the good confession in the presence of many witnesses. I charge you in the presence of God, who gives life to all things, and of Christ Jesus, who in his testimony before Pontius Pilate made the good confession, to keep the commandment unstained and free from reproach until the appearing of our Lord Jesus Christ, which he will display at the proper time—he who is the blessed and only Sovereign, the King of kings and Lord of lords, who alone has immortality, who dwells in unapproachable light, whom no one has ever seen or can see. To him be honor and eternal dominion. Amen. (1 Timothy 6:11-16)

Collect of the Day:
Lord Jesus Christ, You have always given to Your Church on earth faithful shepherds such as Timothy to guide and feed Your flock.  Make all pastors diligent to preach Your holy Word and administer Your means of grace, and grant Your people wisdom to follow in the way that leads to life eternal; for You live and reign with the Father and the Holy Spirit, one God, now and forever.