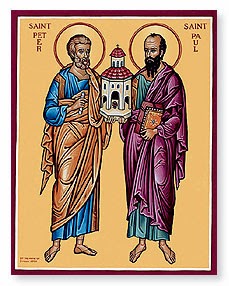 Posted by Surburg's blog at 5:35 AM No comments:

Sermon for the Feast of St. Peter and St. Paul

Posted by Surburg's blog at 5:06 AM No comments:

Culture news: Naming the behavior - The rationalization of sodomy

Matthew Franck has written a review of Robert R. Reilly's book Making  Gay Okay: How Rationalizing Homosexual Behavior Is Changing Everything.  He notes the Reilly focuses on the behavior of sodomy and the manner in which this behavior runs counter to the procreative character of sex.  He writes:

Reilly’s insistence on the centrality of the act of sodomy to our culture war over marriage and sexuality is bound to be off-putting even to some readers inclined to his overall view. He has multiple chapter titles beginning “Sodomy and . . . ,” and he refers throughout the book to “sodomitical relationships.” But this blunt and fearless way of arguing only illustrates the Nietzschean “transvaluation of values” our society has undergone. It is now widely considered a violation of the norms of decency in civil discourse to remind people publicly of what were only a generation ago the norms of decency in private behavior as well as public life.

Reilly is right, however, to be tough and unyielding on this point. His touchstone is nature, and his argument is that nature has equipped men and women to enter into one-flesh unions that are both unitive and procreative (here he might have usefully referred to a book powerfully supporting his view, What Is Marriage?). We human beings have a nature both sexual and rational, and our flourishing and happiness cannot be achieved except in accord with our nature.

What distinguishes some persons from others where “sexuality” is concerned is not a different nature, as though “heterosexual” and “homosexual” were distinct human types or “identities,” but different desires, propensities, and, finally, behaviors. The choice to engage in particular sexual behavior is a matter of free will about which moral judgments can be made. Reilly relentlessly stresses the question of behavior, asking whether we are willing to consider sexual behavior, like other behaviors, as properly governed by the ends of human nature and human flourishing. Thus also his insistence on naming the behavior that one side in the “sexuality” wars wants approval for, and that the other side would rather not think about or talk about.

Posted by Surburg's blog at 7:53 AM No comments:

Commemoration of Cyril of Alexandria, Pastor and Confessor 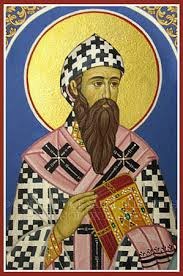 Today we remember and give thanks for Cyril of Alexandria, Pastor and Confessor. Cyril (ca. A.D. 376-444) became archbishop of Alexandria, Egypt, in 412. Throughout his career he defended a number of orthodox doctrines, among them the teaching that Mary, the mother of Jesus, is "rightly called and truly is the Mother of God"--Theotokos, "the God-bearer" (Formula of Concord, VIII, Ep VIII, 12). In 431 the Council of Ephesus affirmed this teaching that the Son of Mary is also true God. The writings of Cyril on the doctrines of the Trinity and the person of Christ reveal him to be one of the most able theologians of his time. Cyril's Christology influenced subsequent church councils and was a primary source for the Lutheran confessional writings.

Collect of the Day:
Heavenly Father, your servant Cyril steadfastly proclaimed your Son, Jesus Christ, to be one person, fully God and fully man.  By your infinite mercy, keep us constant in faith and worship of your Son, who lives and reigns with you and the Holy Spirit, one God, now and forever.

Posted by Surburg's blog at 6:34 AM No comments: 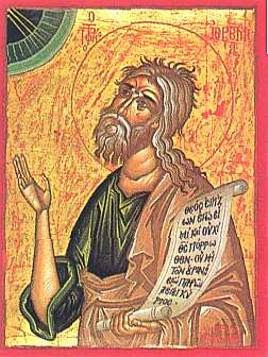 Collect of the Day:
Lord God, Heavenly Father, through the prophet Jeremiah You continued the prophetic pattern of teaching Your people the true faith and demonstrating through miracles Your presence in creation to heal it of its brokenness.  Grant that Your Church may see in Your Son: our Lord Jesus Christ, the final end-times prophet, whose teaching and miracles continue in Your Church through the healing medicine of the Gospel and the Sacraments; through Jesus Christ, our Lord, who lives and reigns with You and the Holy Spirit, one God, now and forever.

Posted by Surburg's blog at 7:37 AM No comments: