Posted by Surburg's blog at 5:00 AM No comments: 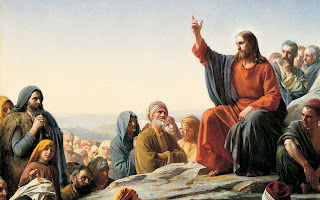 The first three chapters of Genesis lay the foundation for understanding everything that follows in the Bible.  The Jews of Jesus' day knew that God had created man in his own image, and had created them as male and female (Genesis 2:16-17).  They knew that man and woman had been created as a corresponding pair. God said in Genesis 2:18 “It is not good that the man should be alone; I will make a helper fit for him” where the Hebrew translated as “fit for him” means literally, “corresponding to him.” God had instituted marriage as the union of man and woman in the Garden of Eden for we read in Genesis chapter 2:


So the LORD God caused a deep sleep to fall upon the man, and while he slept took one of his ribs and closed up its place with flesh. And the rib that the LORD God had taken from the man he made into a woman and brought her to the man. Then the man said, “This at last is bone of my bones and flesh of my flesh; she shall be called Woman, because she was taken out of Man.” Therefore a man shall leave his father and his mother and hold fast to his wife, and they shall become one flesh. (Genesis 2:21-24 ESV).

Things were very clear.  God created man and woman for one another, and sexual union was shared by husband and wife in marriage. To take part in sexual union outside of marriage violated God’s will (Sixth Commandment).  Yet to engage in a sexual union of any kind besides between a man and a women also violated God’s will since it rejected the way God had ordered His creation.   A Jew of Jesus’ day read in Leviticus 18:22-23, “You shall not lie with a male as with a woman; it is an abomination. And you shall not lie with any animal and so make yourself unclean with it, neither shall any woman give herself to an animal to lie with it: it is perversion (ESV) (see also Leviticus 20:13). Notice how a man having sex with a man is described as an abomination, and how it is set in parallel with a person having sex with an animal.  Both actions violate the way God has ordered His creation.

A Jew in the first century A.D. also knew what had happened at Sodom as reported in Genesis 19:


But before they lay down, the men of the city, the men of Sodom, both young and old, all the people to the last man, surrounded the house. And they called to Lot, “Where are the men who came to you tonight? Bring them out to us, that we may know them.” Lot went out to the men at the entrance, shut the door after him, and said, “I beg you, my brothers, do not act so wickedly. Behold, I have two daughters who have not known any man. Let me bring them out to you, and do to them as you please. Only do nothing to these men, for they have come under the shelter of my roof.” (Genesis 19:4-8 ESV)

The language of “to know” someone is used to indicate sexual intercourse in the Old Testament (for example, Gen 4:1), and the fact that Lot offers his daughters to the men of Sodom indicates that their desire for the male visitors was sexual.  It is true that the Sodomites’ desire to assault the guests was wrong because it was an act of violence that violated near eastern expectations about hospitality provided to guests.  People today use this fact to try to say that the events at Sodom had nothing to do with homosexuality.  But this does not eliminate the fact that the homosexual act intended was itself also wrong based on what the Old Testament tells us.

More importantly for our topic, we know that when Jews around the time of Jesus talked about the events at Sodom, they focused on homosexuality as being the main issue.  This is not surprising based on what they knew from Leviticus 18:22 about homosexuality. So when the Jewish writer Josephus (first century A.D.) provided an account of these events he wrote:


Now when the Sodomites saw the young men to be of beautiful countenances, and this to an extraordinary degree, and that they took up lodgings with Lot, they resolved themselves to enjoy these beautiful boys by force and violence; and when Lot exhorted them to sobriety, and not to offer anything immodest to the strangers, but to have regard to their lodging in his house; and promised, that if their inclinations could not be governed, he would expose his daughters to their lust, instead of these strangers – neither thus were they ashamed. (Antiquities 1.11.3)

Judaism knew about the existence of homosexuality among the pagans around them, and also in the Greco-Roman world.  Because of what was in the Torah, in response to this they categorically rejected it as immoral and contrary to God’s ordering of creation.  In fact in his classic work Between Athens and Jerusalem: Jewish Identity in the Hellenistic Disaspora, the scholar John J. Collins writes: “No sin is denounced more frequently in Jewish writings than homosexuality” (pg. 159).  So the Jewish writer of the Sibylline Oracle Book 3 (second century B.C.) says of the Gentile kingdoms:


They will also oppress mortals. But those men will have a great fall when they launch upon a course of unjust haughtiness.  Immediately compulsion to impiety will come upon these men.  Male will have intercourse with male and they will set up boys in houses of ill-fame and in those days there will be a great affliction among men and it will throw everything into confusion. (3.182-187)

He sets the Jews in contrast to the Gentiles when he writes:


Greatly, surpassing all men, they are mindful of holy wedlock, and they do not engage in impious intercourse with male children as do Phoenicians, Egyptians, and Romans, spacious Greece and many nations of others, Persians and Galatians and all Asia, transgressing the holy law of immortal God, which they transgressed. (3.595-600)

However, it was not the difference in age, status or power between the two partners that offended Judaism.  Instead it was the fact that the homosexual act itself violated the way God had ordered creation. Probably writing in the first century A.D. the Jewish writer identified as Pseudo-Phocylides stated: “Do not transgress with unlawful sex the limits of nature.  For even animals are not pleased by intercourse of male with male. And let women not imitate the sexual role of men” (190-192).

The first century A.D. Josephus wrote in Against Apion:


But then, what are our laws about marriage?  That law owns no other mixture of sexes but that which nature hath appointed, of a man with his wife, and that this be used only for the procreation of children.  But it abhors the mixture of male with male; and if anyone do that, death is his punishment. (2.25)


And let the man who is devoted to the love of boys submit to the same punishment [death], since he pursues that pleasure which is contrary to nature, and since, as far as depends upon him, he would make the cities desolate, and void, and empty of all inhabitants, wasting his power of propagating his species, and moreover, being a guide and teacher of those greatest of all evils, unmanliness and effeminate lust, stripping young men of the flower of their beauty, and wasting their prime of life in effeminacy, which he ought rather on the other hand to train to vigour and acts of courage; and last of all, because, like a worthless husbandman, he allows fertile and productive lands to lie fallow, contriving that they will continue barren, and labours night and day at cultivating that soil from which he never expects any produce at all. (Special Laws 3.39).

In taking this position Hellenistic Jewish writers were not only reflecting what the Torah said, but also could align themselves with the significant parts of the Greek philosophical tradition that rejected homosexuality, including Plato, Antisthenes and the Cynics and the Epircureans (see Collins, Between Athens and Jerusalem, pg. 159).

When Jesus did talk about marriage, he returned to what Genesis 2 said:


And Pharisees came up to him and tested him by asking, “Is it lawful to divorce one's wife for any cause?” He answered, “Have you not read that he who created them from the beginning made them male and female, and said, ‘Therefore a man shall leave his father and his mother and hold fast to his wife, and the two shall become one flesh’? So they are no longer two but one flesh. What therefore God has joined together, let not man separate.” (Matthew 19:3-6 ESV) 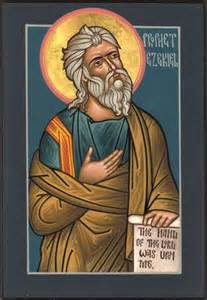 Today we remember and give thanks for the prophet Ezekiel.  Ezekiel, son of Buzi, was a priest, called by God to be a prophet to the exiles during the Babylonian captivity (Ez. 1:3). In 597 B.C. King Nebuchadnezzar and the Babylonian army brought the king of Judah and thousands of the best citizens of Jerusalem—including Ezekiel—to Babylon (2 Kgs 24:8–16). Ezekiel’s priestly background profoundly stamped his prophecy, as the holiness of God and the Temple figure prominently in his messages (for example, Ezekiel 9–10 and 40–48). From 593 B.C. to the destruction of Jerusalem and the temple in 587 B.C., Ezekiel prophesied the inevitability of divine judgment on Jerusalem, on the exiles in Babylon, and on seven nations that surrounded Israel (Ezekiel 1–32). Jerusalem would fall, and the exiles would not quickly return, as a just consequence of their sin. Once word reached Ezekiel that Jerusalem and the temple were destroyed, his message became one of comfort and hope. Through him God promised that his people would experience future restoration, renewal and revival in the coming Messianic kingdom (Ezekiel 33–48). Much of the strange symbolism of Ezekiel’s prophecies was later employed in the Revelation to St. John

Collect of the Day:
Lord God, heavenly Father, through the prophet Ezekiel, you continued the prophetic pattern of teaching your people the truth faith and demonstrating through miracles your presence in creation to heal it of its brokenness.  Grant that your Church may see in your Son, our Lord Jesus Christ, the final end-times prophet whose teaching and miracles continue in your Church through the healing medicine of the Gospel and the Sacraments; through Jesus Christ, our Lord, who lives and reigns with You and the Holy Spirit, one God, now and forever.

Posted by Surburg's blog at 7:09 AM No comments: