Posted by Surburg's blog at 4:44 AM No comments: 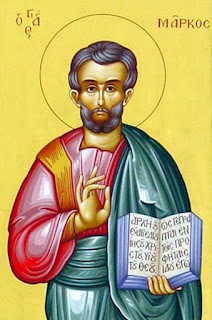 Today is the Feast of St. Mark, Evangelist.  St. Mark was the author of the second Gospel.  Also known as John Mark, he was originally from Jerusalem where the house of his mother was a center of the early church (Acts 12:12).  Paul and Barnabas brought Mark to Antioch (Acts 12:25) and he accompanied them on the first missionary journey.  Mark left them during the journey (Acts 13:13) and later Mark was the cause of the parting that occurred between Paul and Barnabas when Paul wanted to take Mark along on the second missionary journey (Acts 15:37-40).  Later, Paul and Mark were reconciled and Mark assisted Paul (Colossians 4:10; Philemon 24; 2 Timothy 4:11).  Mark also later worked with Peter (1 Peter 5:13).  Tradition indicates that Mark helped to found the church in Egypt (Alexandria) and that he was martyred there.

Scripture reading:
As for you, always be sober-minded, endure suffering, do the work of an evangelist, fulfill your ministry.  For I am already being poured out as a drink offering, and the time of my departure has come. I have fought the good fight, I have finished the race, I have kept the faith. Henceforth there is laid up for me the crown of righteousness, which the Lord, the righteous judge, will award to me on that Day, and not only to me but also to all who have loved his appearing.

Do your best to come to me soon. For Demas, in love with this present world, has deserted me and gone to Thessalonica. Crescens has gone to Galatia, Titus to Dalmatia. Luke alone is with me. Get Mark and bring him with you, for he is very useful to me for ministry. Tychicus I have sent to Ephesus. When you come, bring the cloak that I left with Carpus at Troas, also the books, and above all the parchments. Alexander the coppersmith did me great harm; the Lord will repay him according to his deeds. Beware of him yourself, for he strongly opposed our message. At my first defense no one came to stand by me, but all deserted me. May it not be charged against them! But the Lord stood by me and strengthened me, so that through me the message might be fully proclaimed and all the Gentiles might hear it. So I was rescued from the lion's mouth. The Lord will rescue me from every evil deed and bring me safely into his heavenly kingdom. To him be the glory forever and ever. Amen. (2 Timothy 4:5-18)

Collect of the Day:
Almighty God, You have enriched Your Church with the proclamation of the Gospel through the evangelist Mark.  Grant that we may firmly believe these glad tidings and daily walk according to Your Word; through Jesus Christ, our Lord, who lives and reigns with You and the Holy Spirit, one God,  now and forever.

Posted by Surburg's blog at 6:54 AM No comments: 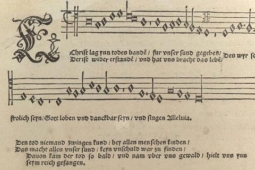 Today we remember and give thanks for Johann Walter, Kantor.   Johann Walter (1496-1570) began service at the age of 21 as a composer and bass singer in the court chapel of Frederick the Wise. In 1524, he published a collection of hymns arranged according to the church year. It was well received and served as the model for numerous subsequent hymnals. In addition to serving for 30 years as kantor (church musician) in the cities of Torgau and Dresden, he also assisted Martin Luther in the preparation of the Deutsche Messe (1526). Walter is remembered as the first Lutheran kantor and composer of church music.

Collect of the Day:
O Lord God, through the life, death, and resurrection of Your Son, Jesus Christ, and by the power of the Holy Spirit, the revelation of Your salvation mystery is now revealed and made known to all the nations. Grant that this mystery of salvation, as confessed by Johann and all those who now rest from their labors, continue to guide Your Church on earth as we wait for the day when You come from heaven one last time and usher in the new creation; through Jesus Christ, our Lord, who lives and reigns with You and the Holy Spirit, one God, now and forever.

Posted by Surburg's blog at 6:47 AM No comments:

Posted by Surburg's blog at 4:50 AM No comments: