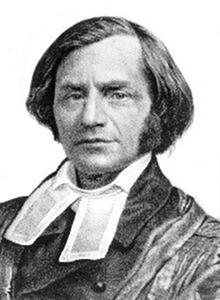 Today we remember and give thanks for Friedrich Wyneken, Pastor and Missionary.  Friedrich Wyneken is one of the founding fathers of The Lutheran Church--Missouri Synod, along with C.F.W. Walther and Wilhelm Sihler. Born in 1810 in Germany, he came to Baltimore in 1838 and shortly thereafter accepted a call to be the pastor of congregations in Friedheim and Fort Wayne, Indiana. Supported by Wilhelm Loehe's mission society, Wyneken served as an itinerant missionary in Indiana, Ohio, and Michigan, particularly among Native Americans. Together with Loehe and Sihler, he founded Concordia Theological Seminary in 1846 in Fort Wayne, Ind. He later served as the second president of the LCMS during a period of significant growth (1850-64). His leadership strongly influenced the confessional character of the LCMS and its commitment to an authentic Lutheran witness.

Collect of the Day:
Almighty and everlasting God, we thank You for Your servant Friedrich, whom You called to preach the Gospel in America. Raise up in this and every land evangelists and heralds of Your kingdom, that Your Church may proclaim the unsearchable riches of our Savior Jesus Christ; who lives and reigns with You and the Holy Spirit, one God, now and forever.