Mark's thoughts: Shall we look for another? 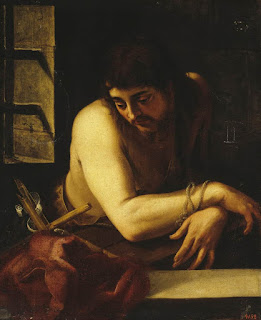 In Matthew chapter 11 we learn that from prison, John the Baptist sent his disciples to Jesus in order to ask a question.  John had been imprisoned by Herod Antipas because he had confronted the king about marrying his brother’s wife.  John had announced to Herod, “It is not lawful for you to have her” (Mt 14:4).  So Herod showed John who was king and who was not.  He imprisoned the prophet.

In prison John the Baptist heard about the ministry of Jesus.  There was talk about miracles and wonders performed by Jesus.  Yet there remained John, a prisoner of Herod Antipas.  Matthew tells us, “Now when John heard in prison about the deeds of the Christ, he sent word by his disciples and said to him, ‘Are you the one who is to come, or shall we look for another?’” (Matthew 11:2-3 ESV).

“Are you the one who is to come, or shall we look for another?”  Christians have often tried to explain away these words.  They have said that of course John the Baptist knew that Jesus was the One.  After all at Jesus’ baptism, John had tried prevent the event as he said, “I need to be baptized by you, and do you come to me?” (Matthew 3:14 ESV). They have explained that John sent the disciples with this question so that the disciples could hear the confirmation from Jesus himself.

Yet this is certainly wrong. During his ministry John the Baptist had proclaimed:


“I baptize you with water for repentance, but he who is coming after me is mightier than I, whose sandals I am not worthy to carry. He will baptize you with the Holy Spirit and fire. His winnowing fork is in his hand, and he will clear his threshing floor and gather his wheat into the barn, but the chaff he will burn with unquenchable fire.” (Matthew 3:11-12 ESV)

John had proclaimed the one who would bring God’s end-time judgment.  This one would bring the judgment of the Last Day, when God would rescue his people and destroy the wicked.  John knew Jesus to be this one.  Jesus had begun his ministry and was indeed doing mighty deeds.  However, the Last Day had not arrived.  The chaff had not been burned up.  Instead the wicked Herod Antipas was still in charge and the righteous John the Baptist was his prisoner.  This was not how things were supposed to work.  John was confused.

John’s disciples brought the question to Jesus.  He replied:

“Go and tell John what you hear and see: the blind receive their sight and the lame walk, lepers are cleansed and the deaf hear, and the dead are raised up, and the poor have good news preached to them. And blessed is the one who is not offended by me.”

Jesus’ answer used words from Isaiah chapter 35 and 61 – texts that spoke about God’s end-time salvation.  Our Lord’s answer to John was: “Yes! I am he!”   But then he added, “And blessed is the one who is not offended by me.”  Jesus acknowledged that things were not happening as John the Baptist and many others expected.

Jesus announced that in him, the kingdom of God – the reign of God – had arrived that was driving out Satan, sin and death (Matthew 4:17).  He declared, “But if it is by the Spirit of God that I cast out demons, then the kingdom of God has come upon you” (Matthew 12:28 ESV).  He was the presence of God’s end-time salvation.

But while Jesus was mighty and powerful, God’s plan for this salvation did not only include victory and success.  Instead, it arrived in suffering and death.  The turning point in Matthew’s Gospel occurs at 16:21 where after Peter confesses that Jesus is the Christ the Son of the living God (16:16) Matthew goes on to tell us, “From that time Jesus began to show his disciples that he must go to Jerusalem and suffer many things from the elders and chief priests and scribes, and be killed, and on the third day be raised” (Matthew 16:21 ESV).  Later Jesus says, “the Son of Man came not to be served but to serve, and to give his life as a ransom for many” (Matthew 20:28 ESV).

John the Baptist was wrong about Jesus … and he was right.  He was wrong in that Jesus did not bring the judgment of the Last Day at his first coming.  Instead his ministry was directed toward suffering, death and resurrection. But John was also right.  Jesus was the coming One. And he will in fact do all of the things that John declared when he returns in glory on the Last Day (see Matthew 25:31-46).

I find the text about John’s question to be of great help as we think about the Christian life today.  John the Baptist sat prison as Jesus brought the reign of God through his ministry.  God’s end-time saving work was present, and yet it didn’t seem to be making any difference for John.

Today the kingdom of God – the reign of God – continues to be present in our midst through Christ’s Means of Grace. Through the Word, Holy Baptism, Holy Absolution and the Sacrament of the Altar, Jesus Christ forgives sins.  His Spirit delivers the salvation Christ has won and strengthens us in the faith.

Jesus’ answer to us continues to be “Yes! I am he!  And blessed is the one who is not offended by me.”  The “now and the not yet” of God’s salvation is the great mystery of the Christian life.  In Christ we already have forgiveness, salvation and eternal life. Yet we also await the consummation of the Last Day when Christ will transform our bodies to be like his resurrection body (Philippians 3:20-21) and we will never again be troubled by Satan, sin and death.

We feel like John the Baptist sitting in prison. The reign of God is here, and yet it doesn’t seem to be doing us any good.  This situation is a call to faith.  Jesus knew how things looked.  That is why he said,  “Blessed is the one who is not offended by me.”  We are called to trust in Jesus and his death and resurrection.  It is the resurrection of Jesus Christ that gives us hope.  The apostle Peter put it this way:


Blessed be the God and Father of our Lord Jesus Christ! According to his great mercy, he has caused us to be born again to a living hope through the resurrection of Jesus Christ from the dead, to an inheritance that is imperishable, undefiled, and unfading, kept in heaven for you, who by God's power are being guarded through faith for a salvation ready to be revealed in the last time. (1 Peter 1:3-5 ESV)

As we face the challenges of life in this fallen world we have the assurance that because of Jesus we are already the children of God.  We are forgiven, loved and saved.  The reign of God is present in our midst through Christ’s Means of Grace as the Spirit sustains us in this faith. And at the same time, we know what John the Baptist did not.  We know the whole story.   We know of the resurrection of Jesus Christ and so we have the living hope that sustains us as we walk day by day and look expectantly for the Last Day.