Commemoration of Gregory the Great 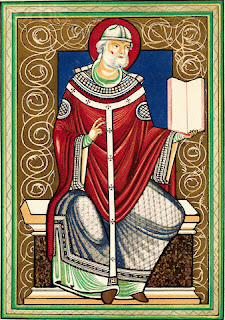 Today we remember and give thanks for Gregory the Great, Pastor.  One of the great leaders in Europe at the close of the sixth century, Gregory served in both the secular and sacred arenas of his era. As mayor of Rome, he restored economic vitality to his native city, which had been weakened by enemy invasions, pillage, and plague. After he sold his extensive properties and donated the proceeds to help the poor, he entered into full-time service in the Church. On September 3, 590 A.D., Gregory was elected to lead the church in Rome. As Bishop of Rome he oversaw changes and growth in the areas of church music and liturgical development, missionary outreach to northern Europe, and the establishment of a church-year calendar still used by many churches in the western World today. His book on pastoral care became a standard until the 20th century.

Collect of the Day:
Almighty and merciful God, You raised up Gregory of Rome to be a pastor to those who shepherd God’s flock and inspired him to send missionaries to preach the Gospel to the English people.  Preserve in Your Church the catholic and apostolic faith that Your people may continue to be fruitful in every good work and receive the crown of glory that never fades away; through Jesus Christ, our Lord, who lives and reigns with You and the Holy Spirit, one  God, now and forever.
Posted by Surburg's blog at 6:42 AM