Feast of St. Michael and All Angels 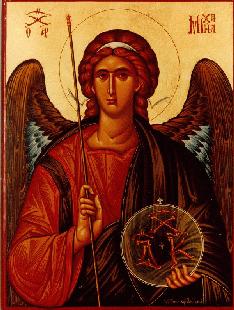 Today is the Feast of St. Michael and All Angels.  The observance of a day to honor the angel St. Michael dates to the fifth century.  It was later expanded to include all angels. .  We confess in the Nicene Creed, “I believe in God, the Father almighty, maker of heaven and earth and of all things visible and invisible.”  Included in this are the angels who are spiritual beings created by God to serve Him and help His people.

The Bible mentions two angels by name.  Michael is mentioned in Daniel (10:13, 21; 12:1), Jude 9 and Revelation 12:7.  On the basis of these passages he has been honored as “captain of the heavenly hosts.”  Gabriel is mentioned in Daniel 8:16 and 9:21, and was the messenger of God in the annunciation to Zechariah (Luke 1:19) and Mary (Luke 1:26).  In the Scripture reading from Revelation 12, Michael and the angels cast Satan from heaven.  This casting out of Satan took place as a result of Christ’s victory in his death, resurrection, and ascension.  No longer is Satan allowed to appear before God and accuse His people (such as we find in Zechariah 3:1-5; the name Satan means “adversary” in Hebrew).

Scripture reading:
Now war arose in heaven, Michael and his angels fighting against the dragon. And the dragon and his angels fought back, but he was defeated, and there was no longer any place for them in heaven. And the great dragon was thrown down, that ancient serpent, who is called the devil and Satan, the deceiver of the whole world—he was thrown down to the earth, and his angels were thrown down with him. And I heard a loud voice in heaven, saying, “Now the salvation and the power and the kingdom of our God and the authority of his Christ have come, for the accuser of our brothers has been thrown down, who accuses them day and night before our God.  And they have conquered him by the blood of the Lamb and by the word of their testimony, for they loved not their lives even unto death. Therefore, rejoice, O heavens and you who dwell in them! But woe to you, O earth and sea, for the devil has come down to you in great wrath, because he knows that his time is short!” (Revelation 12:7-12).

Collect of the Day:
Everlasting God, You have ordained and constituted the service of angels and men in a wonderful order.  Mercifully grant that, as Your holy angels always serve and worship You in heaven, so by Your appointment they may also help and defend us here on earth; through Your Son, Jesus Christ, our Lord, who lives and reigns with You and the Holy Spirit, one God, now and forever.