Mark's thoughts: A Ranger instead of Pastor 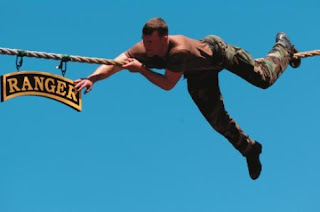 I knew that I wanted to be a pastor when I was in first grade. It is not as if this was an idea that came out of the blue.  Both of my grandfathers had been pastors and then seminary professors.  They certainly had a large role.  Yet in truth it was really the experience at Redeemer Lutheran Church and School in Warrington, FL that made this very clear to me.  I was immensely influenced by the ministry of Pastor Rupp and saw in him the role model of what a pastor was.  I found during my time at Redeemer that I enjoyed being at church. It felt comfortable.  It just felt “right.”

Those feelings never changed.  During my middle school and high school years I discovered that I was very good at foreign languages, literature and the humanities – and that I was not gifted at math and science.  The skills God had given me certainly matched my interest in being a pastor.  I attended Concordia College, Ann Arbor, MI as a pre-seminary student.  And at my first taste of Greek and theology, I was hooked. It was like a drug.  I couldn’t get enough of it and didn’t want to study anything else.  Here was something that was both intellectually fascinating and also of eternal importance for all people.

As a parish pastor today, those two experiences still hold true.  Church is the setting where I feel at home.  It just feels right.  My love affair with theology continues, though now it is meaningful in ways I never could have understood in my younger years because all of the learning is seen through the experiences of pastoral ministry.

I can’t imagine doing anything else.  Thankfully, I don’t have to worry about that since I have been blessed with a parish that is a friendly congregation; is supportive of her pastor; and is committed to practicing as a Lutheran church.  After nine years, my life and the life of my family have been intertwined with people we love and who love us.

Until about six months ago, I had assumed that my oldest son would follow the same path.  He was always very serious about the Christian faith and inquisitive about theological matters.  He had expressed the thought that most likely he would become a pastor.  I never did anything to encourage or discourage this in him.  But I assumed it would turn out that way.  It just made sense.

And then about sixth months ago I learned that things had changed.  He had a different vocation in mind and was very serious about it.  He had decided that he wanted to go into the military as a career.  His plan is now to try to get into West Point, or to become an officer through a ROTC program at college.  And his ultimate goal is to become an Army Ranger.

His mom had picked up on this before I did, and it is now clear that he has been thinking this way for more than a year.  While I was at first surprised, it didn’t take long to realize that it makes sense. There are many reasons it would be a good fit for him.  He is only a freshman in high school, and so much can change. But I will be surprised if it does.

Not long ago I was relating this change to a good friend who is also pastor.  He asked what I thought about it.  I told him that I was relieved.  We both laughed at what I had said – that I was relieved my son now wanted to enter a vocation where death or injury in combat was a very real possibility.  But he knew exactly what I meant.

If my son were to enter the ministry, he would probably attend a pre-seminary program at a Concordia University. I would send him there because the background of Greek, Hebrew and theology would make seminary so much easier, and allow him to get so much more out of it.

Deep down, in my heart of hearts, that is precisely what I feared.  I have been around the Lutheran Church – Missouri Synod long enough to know that we are a church that allows congregations to do terrible things to pastors.  Faithful men through no fault of their own can easily find themselves removed by a congregation. When the congregation voters’ assembly decides it’s not going to pay you anymore, it doesn’t matter what some piece of paper hanging on the wall called a “Diploma of Vocation” says. The pastor has no options. I know of so many situations where this has happened.  The stories are so awful. My wife is part of a closed Facebook group for LCMS wives and there are times when she tells me that she just has to take a break from it for awhile because the same gut wrenching stories occur again and again.  Once you have seen a congregation turn on her pastor and remove him, you can spot it coming a mile away.

These men find themselves without a call.  This is a tragic situation because such an individual ends up on CRM status.  He is eligible for a call, but in a Lutheran understanding of the call he cannot solicit one.  While it can happen, more often than not CRM status men do not receive calls because of the perception that there is “something wrong” with them.  After all, if they were good pastors they wouldn’t be on CRM status in the first place!  More often than not, CRM status is a black hole that sucks men in and never lets them out.

The second thing that occurs is that they find themselves without a job.  Now if you always had being a pastor as your goal, attended college as a pre-seminary student and then attended seminary, you know what other job you are equipped to do? Nothing. Men find themselves with no job; no real possibility to get another job as a pastor; and no training for another kind of job.

While these vocational and economic factors are obvious and terrible, it is the personal toll that is probably the worst.  The experience of having a congregation turn on a pastor and remove him often results in depression and mental illness.  Marriages are destroyed – I know of divorces that have occurred as a result the stress produced by this experience. And then there are the most easily overlooked victims – the children. What does it do to a child or young person’s perception of the Christian faith and the Church when a congregation turns on his or her father and seeks to destroy him?

Beyond this, there is the basic fact that our culture is rapidly becoming not only post-Christian, but also hostile towards basic biblical truths.  The pastor is called to walk point. As the shepherd who leads, he is the one who must always take a stand against things that are wrong.  It is a tiring, lonely task that is only going to get harder.

Christ calls men to serve in his Office of the Holy Ministry as he wills.  If he calls, you won’t escape him.  Trying to do so will only make life uncomfortable.  It appears that perhaps, he is not calling my son.  And how do I feel? Relieved.  It seems that he wants to undertake a honorable and important vocation that can be a very fulfilling career.  I know that it is one where there is the possibility of death or injury.  But I am thankful that I will not have to see my greatest fear play out: standing by powerless as I watch a Lutheran congregation destroy him and his family.

This is not the thing you are supposed to say.  This is not what gets said on Facebook when pictures of seminary call night and installations are posted. It is not said because it is too honest.  We hide ourselves from the truth, in hopes that the truth doesn’t find our son or son-in-law.