Mark's thoughts: Chasuble - Explaining the Vestment of the Divine Service 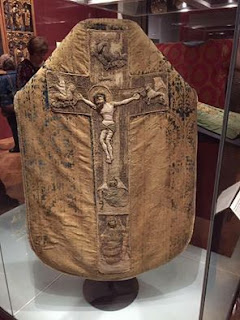 The chasuble began as the cloak worn in everyday life.  It is mentioned by St. Paul in 2 Tim. 4:13.  The name chasuble comes from the Latin term casula which meant “little hut” because it covered the whole man.  As the casula passed out of secular usage, it was retained as a clerical vestment and became known as a chasuble. It appears in art as clerical dress as early as the beginning of the fifth century.  The chasuble was worn by every priest who was celebrating the Sacrament of the Altar.  Since every Divine Service (“Mass” as it was called in the medieval period and by the first Lutherans) included the Sacrament, it was the distinctive vestment of the Divine Service at the time of the Reformation.

Like other aspects of the catholic (universal) heritage of the Church such as the liturgy, lectionary and church year, the Lutherans retained the traditional vestments.  Pictured above is a chasuble that Martin Luther used.  In the sixteenth century Lutheran altarpiece below we see again that the Lutherans continued to use the chasuble as the distinctive vestment of the Divine Service. 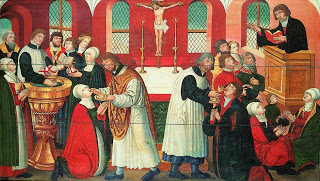 Its use continued in the seventeenth century and into the early eighteenth century such as at J.S. Bach’s church in Leipzig.  However rationalism and the forced union with Reformed churches (which had rejected vestments) caused many churches to abandon the use of the chasuble and other vestments.  During the twentieth century there was a recognition of the loss that had occurred and first the cassock and surplice (originally worn at Matins and Vespers), and then the alb (the white vestment worn by most pastors today) were brought back into use.  Along with this, many churches have begun using a chasuble once again.  The introduction of the chasuble is part of this movement to reclaim the Lutheran practice of the Reformation.


The chasuble is beautifully decorated in the liturgical color of the season.  Often on the front and back it has bands called an orphery that form a cross.  The chasuble is part of the ceremony of the liturgy.  This ceremony – the movements by the pastor, the way the communion ware is handled, the vestments, paraments, candles, etc. – is part of the Church’s catholic (universal) culture.  The chasuble visually signifies that like the Lutherans of the Reformation we embrace the catholic faith and the practice that flows from it.
Posted by Surburg's blog at 9:26 AM