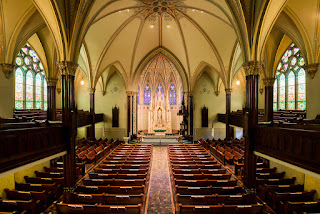 On Friday, Feb. 4, the Southern Illinois District in convention passed Resolution 1-05 To Affirm the Church’s Essential Nature and Freedom to Celebrate the Divine Service.  It affirms the essential nature of the Church’s Gospel work, and declares that the Government has no God given authority to place restrictions on the Church’s ability to celebrate the Divine Service, and on God’s people who wish to attend and receive the Means of Grace. Instead, in the face of health concerns, the Church will implement those actions that in her own judgment do not interfere with her God-given functions, while respectfully disregarding any government decree, mandate, executive action, law, or court order which does so interfere.

I voted for the resolution, which passed with 94.81% of delegates voting in support of it (Today’s Business, Volume 2, pg. 19).  I will confess that my own understanding of this issue has grown and changed since March 2020 because of the events that have taken place.

When Covid-19 first appeared in the spring of 2020, there were so many unknowns about the nature of the virus and the threat it posed.  As state and local governments enacted restrictions aimed at “flattening the curve,” churches viewed this through the lens of Romans 13 and the need to obey authorities. We willingly obeyed as services were cancelled.

Several churches sued the Governor, and after May 28, 2020 when Governor Pritzker refused to respond to the Supreme Court case, churches were not subject to the Covid directives that he issued.  The Governor indicated at that time that the state was not providing mandatory restrictions on churches and instead, he issued “COVID-19 Guidance for Places of Worship and Providers of Religious Services.”

On August 26, 2021 the Governor issued his executive order that “all individuals in Illinois who are age two or over and able to medically tolerate a face covering (a mask or cloth face covering) shall be required to cover their nose and mouth with a face covering when in an indoor public place.” The “all” in the executive order did not indicate any exemption for churches.  Without acknowledging it, the Governor ignored his earlier May 28, 2020 position about churches that had been expressed in “COVID-19 Guidance for Places of Worship and Providers of Religious Services” as the mandate went into effect on August 30.  Those guidelines had been removed from the Illinois Department of Public Health website at the time of the Governor’s Aug. 26, 2021 mask order, and are no longer available on the Illinois Department of Public Health website.

On October 14 we in the Southern Illinois District learned that the Illinois Department of Health website now had a link to a document under the heading “Mask and Vaccine Requirement FAQ’s” which stated that “The free exercise of religion is exempted from the face covering requirement.”  While the  document was dated Sept. 3, it was not available on the Illinois Department of Health website during the weeks after the Governor’s mandate went into effect on Aug. 30. I worked with the site on multiple occasions during that month as I sought to investigate the mandate and consider our congregation’s response, and it was not present. It is clear that this information was added to the Illinois Department of Health website towards the very end of September.  No announcement about this new information was made.  That is why the Southern Illinois District leadership and pastors did not know about it.

During the month of September Governor Pritzker, to the best of our knowledge at the time, placed mandatory restrictions on the Church, an act that contradicted his May 28, 2020 statement and the “COVID-19 Guidance for Places of Worship and Providers of Religious Services” issued at that time.  The manner in which we learned that the churches had an exception from the mandate did not indicate an open and transparent willingness to affirm the free exercise of religion.

As we understood it during September, the governor’s new mask mandate did not prevent the Church from worshipping.  It had as its aim public health which is a responsibility of the State, and so my congregation chose to observe it. We viewed this as matter of Roman 13 in which we seek to obey the State when its mandates and commands don’t directly violate God’s Word.

At my congregation we sought to obey the Governor’s mask mandate during the time we were left with the impression that we were subject to it. But the reality is that if strictly enforced, the mask mandate allowed the State to place requirements and limitations on who can attend the Divine Service and who cannot. It said that you must wear a mask if you wish to enter the church.  If you don’t, when you are physically able to do so, then you can’t come into the church.  This placed a limitation on members that is not even imposed on individuals who have been excommunicated. They are permitted to attend the Divine Service, but not to receive the Sacrament of the Altar.  I knew a member in our congregation in the medical field who had investigated the various studies about the effectiveness of masks and was convinced that they are of no real benefit.  This person believed that forcing people to wear them perpetuated a lie, and as a matter of conscience the individual would not wear a mask.  If strictly enforced, the governor’s mandate would have forced the Church to deny access to the Divine Service to this individual.

In the end we found in our congregation that we could not strictly enforce the mask mandate, because we were not going to allow it to prevent people from receiving the Means of Grace.  The fact we felt compelled for the sake of the Gospel to avoid strict enforcement revealed that the State cannot be allowed to dictate what happens in the Church’s worship.

These experiences have led me to recognize that the Lutheran doctrine of the two kingdoms prevents us from accepting any form of mandates/executive orders that direct how the Church is to administer the Means of Grace and the Divine Service. This is, of course, not a legal argument, but instead is a theological one.

It is an important Lutheran insight that God’s rule occurs in two different ways within the world.  The Church rightfully operates in God’s right hand rule through the Gospel as she seeks to bring forgiveness and salvation through Christ’s Means of Grace.  The State rightfully operates in God’s left hand rule, as it works through the Law to maintain order and restrain sin.  The State has no authority or place in God’s right hand rule that occurs in the Church through the Gospel.  The State cannot place limitations on the Church’s administration of the Means of Grace. As Lutherans, we recognize that the administration of the Means of Grace and the Divine Service are simply not the State’s God given sphere of responsibility and authority. This is something the Church simply can’t accept. The left hand rule of the State can never be allowed to deny attendance at the Divine Service.  This is not its realm of authority.  Instead, the Church is in charge of the administration of the Means of Grace.

The Church may choose to make adjustments in the face of various situations that arise.  She may draw upon the information provided by the Government’s actions as it works in its proper sphere of authority, and choose to implement those she finds to be appropriate. But the Government cannot place restrictions on the Church’s ability to celebrate the Divine Service, and on God’s people who wish to attend and receive the Means of Grace.

Below is the text of Resolution 1-05.  The Whereas statements lay out the important theological data that guide our thought as Lutherans. The Resolved statements reflect a proper approach and response by the Church.  The official text can be found on pg. 42-43 of Today’s Business, Volume 1.

Resolution 1-05 To Affirm the Church’s Essential Nature and Freedom to Celebrate the Divine Service (Derived from Overture 1-05.)

Overview: During the course of the pandemic the Government issued orders that shut down all religious services by including them among “non-essential activities.” It later restricted religious services to ten people or less, and eventually required those attending to wear masks. All these actions placed restrictions on the Church’s ability to celebrate the Divine Service, and on God’s people who wish to attend and receive the Means of Grace. This has raised questions that need to be addressed about the Government’s right to dictate restrictions to the Church regarding the celebration of the Divine Service.

WHEREAS, the Church is the assembly of all believers among whom the Gospel is purely preached and the holy sacraments are administered according the Gospel (AC VII.1), and God has commanded his people to gather to hear his Word and receive His Sacraments (Acts 2:42; 1 Timothy 4:13; Hebrews 10:25; 1 Corinthians 11:24-25), just as the Lutheran Church confesses that the Sacrament of the Altar is celebrated every Lord’s day (Ap. XXIV.1), and

WHEREAS, this is the essential function which only the Church fulfills as God brings salvation to the whole person, body and soul (Romans 5:1; Philippians 1:23; John 11:25-26; Philippians 22 3:21), and

WHEREAS, God has designed His creation with three estates – the Family, the Church, and the Government, and

WHEREAS, these Three Estates remain (and continue their defining functions) until the end of time, even during pandemic, famine, war, etc., and

WHEREAS, the government is given by God to reward good and punish evil and maintain order as defined by God’s holy will (Romans 13; AC XVI.1-2), and deals with bodies and goods, not spiritual matters (AC XXVIII.11), and

WHEREAS, the Church rightfully operates in God’s right hand rule through the Gospel as she seeks to bring forgiveness and salvation through Christ’s Means of Grace, and

WHEREAS, the Government rightfully operates in God’s left hand rule, as it works through the Law to maintain order and restrain sin, and

WHEREAS, the Church is not entirely independent of the Government’s left hand rule as she deals with non-spiritual matters of operation (zoning laws, building permits, occupancy permits, etc.), and

WHEREAS, the Government has no God given authority over the spiritual matters of the Church’s administration of the Means of Grace as they take place in the Divine Service; therefore be it

RESOLVED, that we affirm the Church’s essential nature, purpose, and ongoing function in this world until Christ comes again in His glory, and be it further

RESOLVED, that we affirm the Church’s and Family’s status as having their God-given role in caring for both body and soul, and be it further

RESOLVED, that we confess that the Government has no God given authority to place restrictions on the Church’s ability to celebrate the Divine Service, and on God’s people who wish to attend and receive the Means of Grace, and be it further

RESOLVED, that we affirm that in time of pandemic or public crisis the Church in Christian freedom should seek to implement measures that serve the public good while continuing to carry out her essential role of offering the Word and the Sacraments in the Divine Service, and be it further

RESOLVED, that we exhort and encourage one another to confess boldly the essential nature and function of the Church, especially in the event of future government mandated shut downs or restrictions to the celebration of the Divine Service, and be it further

RESOVLED, that we confess to the world that only the Gospel of the death and resurrection of the Lord Jesus Christ can provide final victory over sin, sickness, and death; and finally, be it

RESOLVED, that the congregations of the SID will take notice of all government actions regarding public health and while "seeking to live at peace with all men" the Church will implement those actions that in her own judgment do not interfere with her God-given functions, while respectfully disregarding any government decree, mandate, executive action, law, or court order which does so interfere.