Mark's thoughts: "Love" in the Commemoration of Valentine, and Valentine's Day 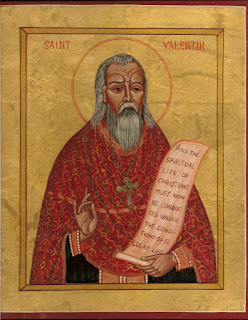 Sometimes history is messy – the facts aren’t as clear as we would like.  Monday, February 14 is the Commemoration of Valentine, or as the world knows it, “Valentine’s Day.”  There is in fact evidence for two individuals named Valentine.  The first was a Roman priest who was martyred around 269 A.D. under the Emperor Claudius, for whom a basilica was built on the Flaminian Way where it meets Rome.  The second was a Roman bishop from Interamna (modern day Terni) who is also said to have been martyred in 269 A.D. while visiting Rome.  A basilica was built for him in Terni on the same Flaminian road.

Unfortunately, the other available evidence of martyrologies (list of martyrs) and hagiographies (biography of an ancient Christian) are contradictory and contain information that is historically questionable.  Included among these are the claims that Valetine secretly performed Christian marriages and provided hearts cut from parchment as a reminder of the marriage vows and God’s love.  Another says that he left a note for the child of his jailer that was written on a piece of irregularly shaped parchment. Both traditions provide a basis for aspects of Valetine’s Day as we know it. The Feast of St. Valentine became associated with romantic love during the late medieval period.

The common features shared by the two Valentines suggests that there was probably one Valentine who was martyred, and whose remains (which were very important in early and medieval Christianity) became associated with two different locations.  On the other hand, those elements that have helped give rise to today’s Valentine’s Day have a far weaker claim to historical accuracy, or developed quite late.

The Commemoration of Valentine and Valentine’s Day are both about love.  While the same word is used, the referent of that word could not be more different. The love described by Valetine’s Day is, in the final analysis, a selfish thing.  While “romantic love” may talk about love for another its real payoff is the way it makes me feel. Who does not enjoy the warm fuzzy feeling of “being in love”?  We love to be in love, because it feels good.

The Commemoration of Valentine is about the love of Christ and the response of love worked by faith in Christ.  St. Paul wrote: “For the love of Christ controls us, because we have concluded this: that one has died for all, therefore all have died; and he died for all, that those who live might no longer live for themselves but for him who for their sake died and was raised” (2 Corinthians 5:14-15).

Christ’s love was expressed in sacrificial action as he died on the cross and rose from the dead to give us forgiveness, resurrection, and eternal life.  The love for Christ shows through in the way we love others.  Jesus said at the Last Supper: “A new commandment I give to you, that you love one another: just as I have loved you, you also are to love one another. By this all people will know that you are my disciples, if you have love for one another” (John 13:34-35).  While this love certainly has an emotional component, it is defined by action.  As he is about to use Jesus as the ultimate example of what he means, Paul tells the Philippians, “Do nothing from rivalry or conceit, but in humility count others more significant than yourselves. Let each of you look not only to his own interests, but also to the interests of others” (Philippians 2:3-4).

Even more so, this love is seen in the confession of Christ and the Gospel. It is a love that loves Christ more than one’s own life.  Jesus said: “If anyone would come after me, let him deny himself and take up his cross and follow me. For whoever would save his life will lose it, but whoever loses his life for my sake will find it” (Matthew 16:24-25).  To love Christ is to confess him as the crucified and risen Lord.  Jesus said, “So everyone who confesses me before men, I also will confess before my Father who is in heaven, but whoever denies me before men, I also will deny before my Father who is in heaven” (Matthew 10:32-32). This confession is a witness.  The English word “martyr” is based on the Greek word “witness.”  A martyr is one who has given witness to Jesus Christ as Lord by dying.  He has loved Jesus more than his own life.

This was the love of Valentine.  We don’t know much about him, but it seems clear that he died as a martyr.  The Commemoration of Valentine points to the confession of Jesus Christ’s love for us.  Through the Holy Spirit, Lord’s self-sacrificial love now causes us to love others through service.  It prompts us to confess Jesus as Lord in our lives, even if that means enduring derision and suffering. We can do this because Jesus is the risen and exalted Lord who has defeated sin, Satan and death.  Jesus assures us, “I have said these things to you, that in me you may have peace. In the world you will have tribulation. But take heart; I have overcome the world” (John 16:33).