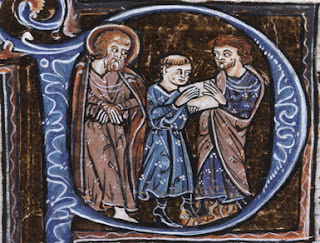 Today we remember and give thanks for Philemon and Onesimus.  Philemon was a prominent first-century Christian who owned a slave named Onesimus. Although the name "Onesimus" means "useful," Onesimus proved himself "useless" when he ran away from his master and perhaps even stole from him (Philemon 18).  Somehow Onesimus came into contact with the apostle Paul while the latter was in prison, and through Paul's proclamation of the Gospel he became a Christian. After confessing to the apostle that he was a runaway slave, he was directed by Paul to return to his master and become "useful" again. In order to help pave the way for Onesimus' peaceful return home, Paul sent him on his way with a letter addressed to Philemon, a letter in which he urged Philemon to forgive his slave for having run away and "to receive him as you would receive me" (v. 17), "no longer as a slave, but as a beloved brother" (v. 16). The letter bears witness to the power of the Gospel as it unites people in Christ and forges the one people of God and was eventually recognized by the Church as one of the books of the New Testament.

Lord God, heavenly Father, You sent Onesimus back to Philemon as a brother in Christ, freeing him from his slavery to sin through the preaching of the apostle Paul.  Cleanse the depths of sin within our souls and bid resentment cease for past offenses, that, by your mercy, we may be reconciled to our brothers and sisters and our lives will reflect your peace; through Your Son, Jesus Christ, our Lord, who lives and reigns with You and the Holy Spirit, one God, now and forever.