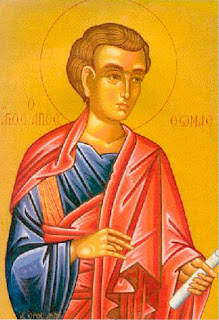 Today is the Feast of St. Thomas, Apostle.  Thomas, called Didymus (“the Twin”) is mentioned in all four Gospels as one of the twelve apostles.  John’s Gospel portrays Thomas as being slow to understand.  Although he expresses doubt about the resurrection, Thomas makes the confession that is the climax of John’s Gospel when he says to the risen Jesus, “my Lord and my God” (John 20:24-29).  According to tradition, Thomas engaged in missionary work in Persia and India where he was martyred for the faith by being speared to death.

Scripture reading:
Now Thomas, one of the Twelve, called the Twin, was not with them when Jesus came. So the other disciples told him, “We have seen the Lord.” But he said to them, “Unless I see in his hands the mark of the nails, and place my finger into the mark of the nails, and place my hand into his side, I will never believe.”  Eight days later, his disciples were inside again, and Thomas was with them. Although the doors were locked, Jesus came and stood among them and said, “Peace be with you.” Then he said to Thomas, “Put your finger here, and see my hands; and put out your hand, and place it in my side. Do not disbelieve, but believe.” Thomas answered him, “My Lord and my God!” Jesus said to him, “Have you believed because you have seen me? Blessed are those who have not seen and yet have believed.”    (John 20:24-29)

Collect of the Day:
Almighty and ever-living God, You strengthened Your apostle Thomas with firm and certain faith in the resurrection of Your Son.  Grant us such faith in Jesus Christ our Lord and our God, that we may never be found wanting in Your sight; through the same Jesus Christ, who lives and reigns with You and the Holy Spirit, one God, now and forever.