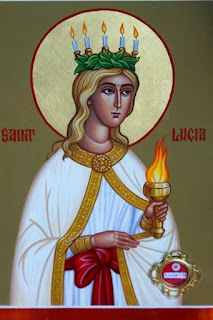 Today we remember and give thanks for Lucia, Martyr.  One of the victims of the great persecution under the Roman emperor Diocletian, Lucia met her death at Syracuse on the island of Sicily in the year A.D. 304, because of her Christian faith. Known for her charity, “Santa Lucia” (as she is called in Italy) gave away her dowry and remained a virgin until her execution by the sword. The name Lucia means “light,” and, because of that, festivals of light commemorating her became popular throughout Europe, especially in the Scandinavian countries. There her feast day corresponds with the time of year when there is the least amount of daylight. In artistic expression she is often portrayed in a white baptismal gown, wearing a wreath of candles on her head.

Collect of the Day:
O Almighty God, by whose grace and power Your holy martyr Lucia triumphed over suffering and remained ever faithful unto death, grant us, who now remember her with thanksgiving, to be so true in our witness to You in this world that we may receive with her new eyes and without tears, the crown of light and life; through Jesus Christ, our Lord, who lives and reigns with You and the Holy Spirit, one God, now and forever.