Presentation of the Augsburg Confession 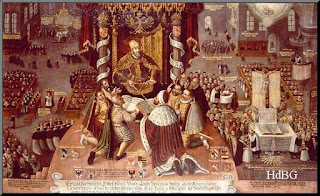 Today is the anniversary of the Presentation of the Augsburg Confession.  In late 1517 when Martin Luther initiated the events that would result in the Reformation, he had no idea regarding what was about to take place.  Luther’s Ninety-five Theses were a call for academic discussion – not for thoroughgoing reformation of the Church.  However the discussions and debates that ensued prompted Luther to further study.  This process continued to reveal the extent to which the Church’s faulty practice was based upon theology which was not true to God’s Word.

Luther was excommunicated by Pope Leo X in 1520.  He was then summoned to appear before the Holy Roman Emperor, Charles V at the Diet of Worms in 1521.  There Luther refused to recant and in the Edict of Worms Luther was declared to be “a manifest heretic.”  The edict declared that no one was to give assistance to Luther, but instead they were to take him prisoner and deliver him to the emperor.  The reading and distribution of Luther’s writings was forbidden.  It was Charles’ intention to deliver Luther over to Pope Leo X for the purpose of burning Luther at the stake.

In 1526 at the Diet of Speyer, an ambiguous edit was passed in which the German princes promised to carry out the Edict of Worms according to their own consciences.  This provided the setting in which Elector John continued his support of the Reformation in Saxony.  However, at the Diet of Speyer in 1529 Charles V corrected the ambiguity of the1526 edict and forbade expansion of the Reformation.  This led the German princes to issue a formal appeal or “protest” (it is from this event that the term “Protestant” arose).

However, Charles V found himself limited in his ability to act against princes and areas that supported the Reformation.  In 1529 the Turkish army had laid siege to Vienna before being turned back.  Charles faced this threat from the east, and he also was engaged in a struggle with France.  He needed the German part of his empire to be united in order to assist him.  He also had a genuine concern about the condition of the Church in the areas that he ruled.
Charles V called for the Lutheran princes and cities to explain their religious reforms at an imperial diet that was to meet in the southern German city of Augsburg in 1530.  Luther was not able to travel to the diet because of edict passed against him in 1521and the Lutherans were led by his colleague, Phillip Melanchthon.  When the Lutherans arrived they found that a Roman Catholic opponent, John Eck, had produced a work entitled Four Hundred Four Propositions.  This work contained quotes from Luther and Melanchthon and mixed them in with heretical statements in the attempt to give the impression that the Lutherans supported most heresies known to the Church.

In the face of this, Melanchthon and the Lutherans realized that they would need to do more than just explain their reforms.  They needed to demonstrate that the theology they taught was true to the catholic (universal) tradition of the Church.  They need to state the biblical truth while condemning the false teachings that the Roman Catholics also rejected.

Melanchthon was able to draw upon some previous doctrinal articles that the Lutherans had written.  He produced the Augsburg Confession which has twenty one articles on doctrinal topics and seven articles on reform efforts.  Latin and German editions of the confession were prepared.  The Latin text was presented to Charles V and the German edition was read aloud to the diet on June 25, 1530.
At Augsburg, the Lutherans confessed the truth of the Gospel in the face of a very real threat to their possessions and lives.  We continue to share in this confession as the Augsburg Confession is the foundational statement of what the Lutheran Church believes and teaches.  In the Augsburg Confession we confess the biblical and catholic (universal) faith before the world.

Collect of the Day:
Lord God, heavenly Father, You preserved the teaching of the apostolic Church through the confession of the true faith at Augsburg.  Continue to cast the bright beams of Your light upon Your Church that we, being instructed by the doctrine of the blessed apostles, may walk in the light of Your truth and finally attain to the light of everlasting life; through Jesus Christ, our Lord, who lives and reigns with You and the Holy Spirit, one  God, now and forever.