Commemoration of Boniface of Mainz, Missionary to the Germans 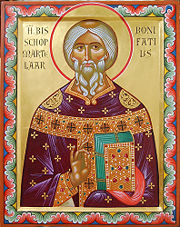 Today we remember and give thanks for Boniface of Mainz, Missionary to the Germans. Boniface was born in the late seventh century in England. He became a monk, and was ordained as a presbyter in England, where he was inspired by the example of others to become a missionary. Upon receiving a papal commission in 719 to work in Germany, Boniface devoted himself to planting, organizing, and reforming churches and monasteries in Hesse, Thuringia, and Bavaria. After becoming an archbishop, Boniface was assigned to the See of Mainz in 743. Ten years later he resigned his position to engage in mission work in the Netherlands. On June 5, 754, while awaiting a group of converts for confirmation, Boniface and his companions were murdered by a band of pagans. Boniface is known as the apostle and missionary to the Germans.

Collect of the Day:
Almighty God, You called Boniface to be a witness and martyr in Germany, and by his labor and suffering You raised up a people for Your own possession. Pour out Your Holy Spirit upon Your Church in every land, that by the service and sacrifice of many Your holy name may be glorified and Your kingdom enlarged; through Jesus Christ, our Lord, who lives and reigns with You and the Holy Spirit, one God, now and forever.