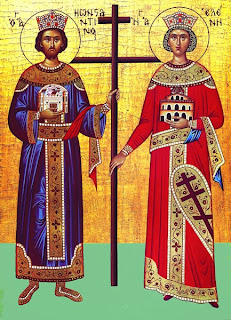 Today we remember and given thanks for Emperor Constantine, Christian Ruler and Helena, Mother of Constantine.  Constantine I served as Roman Emperor from A.D. 306 to 337. During his reign the persecution of Christians was forbidden by the Edict of Milan in 313, and ultimately the faith gained full imperial support. Constantine took an active interest in the life and teachings of the church and called the Council of Nicaea in 325 at which orthodox Christianity was defined and defended. His mother, Helena (ca. 255-329), strongly influenced Constantine. Her great interest in locating the holy sites of the Christian faith led her to become one of the first Christian pilgrims to the Holy Land. Her research led to the identification of Biblical locations in Jerusalem, Bethlehem, and beyond, which are still maintained as places of worship today.

Collect of the Day:
Almighty God, through your servant Constantine, your Church flourished, and by his mother, Helena, the Church of the Holy Sepulchre in Jerusalem became a holy place for many pilgrims.  Grant to us this same zeal for your Church and charity toward your people, that we may be fruitful in good works and steadfast in faith.  Keep us ever grateful for your abundant provision, with our eyes fixed, as Helena’s were, on the highest and greatest treasure of all, the cross of Christ; through Jesus Christ, our Lord, who lives and reigns with You and the Holy Spirit, one God, now and forever.