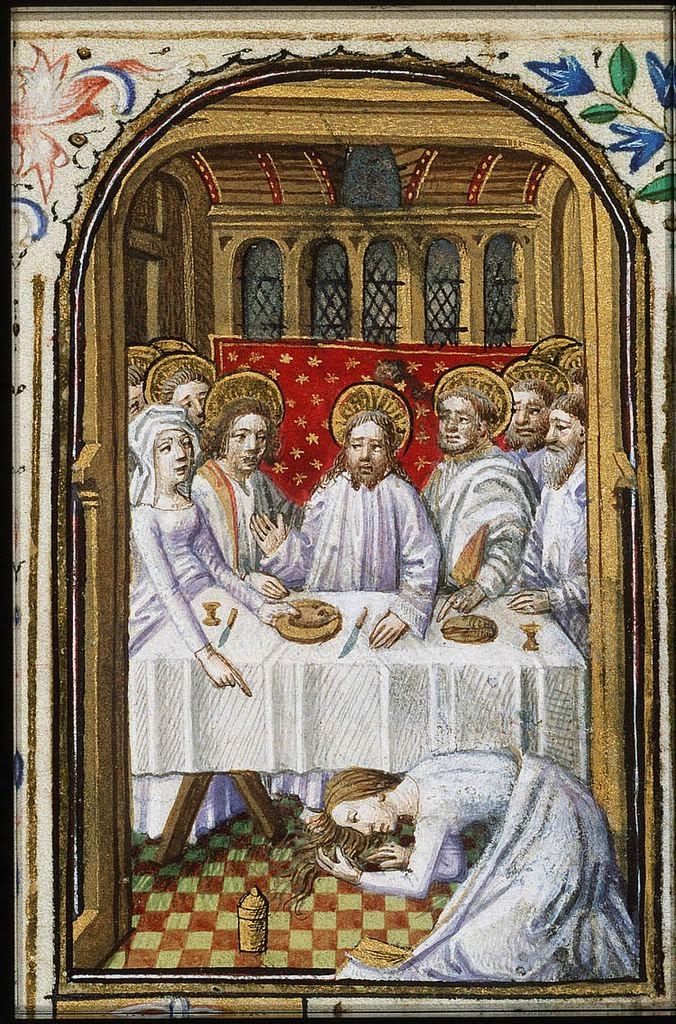 Scripture reading:
Six days before the Passover, Jesus therefore came to Bethany, where Lazarus was, whom Jesus had raised from the dead. So they gave a dinner for him there. Martha served, and Lazarus was one of those reclining with him at table. Mary therefore took a pound of expensive ointment made from pure nard, and anointed the feet of Jesus and wiped his feet with her hair. The house was filled with the fragrance of the perfume. But Judas Iscariot, one of his disciples (he who was about to betray him), said, “Why was this ointment not sold for three hundred denarii and given to the poor?” He said this, not because he cared about the poor, but because he was a thief, and having charge of the moneybag he used to help himself to what was put into it. Jesus said, “Leave her alone, so that she may keep it for the day of my burial. For the poor you always have with you, but you do not always have me.”
When the large crowd of the Jews learned that Jesus was there, they came, not only on account of him but also to see Lazarus, whom he had raised from the dead. So the chief priests made plans to put Lazarus to death as well, because on account of him many of the Jews were going away and believing in Jesus.
The next day the large crowd that had come to the feast heard that Jesus was coming to Jerusalem. So they took branches of palm trees and went out to meet him, crying out, “Hosanna! Blessed is he who comes in the name of the Lord, even the King of Israel!” And Jesus found a young donkey and sat on it, just as it is written,

“Fear not, daughter of Zion;
behold, your king is coming,
sitting on a donkey's colt!”

His disciples did not understand these things at first, but when Jesus was glorified, then they remembered that these things had been written about him and had been done to him. The crowd that had been with him when he called Lazarus out of the tomb and raised him from the dead continued to bear witness. The reason why the crowd went to meet him was that they heard he had done this sign. So the Pharisees said to one another, “You see that you are gaining nothing. Look, the world has gone after him.”
Now among those who went up to worship at the feast were some Greeks. So these came to Philip, who was from Bethsaida in Galilee, and asked him, “Sir, we wish to see Jesus.” Philip went and told Andrew; Andrew and Philip went and told Jesus. And Jesus answered them, “The hour has come for the Son of Man to be glorified. Truly, truly, I say to you, unless a grain of wheat falls into the earth and dies, it remains alone; but if it dies, it bears much fruit. Whoever loves his life loses it, and whoever hates his life in this world will keep it for eternal life. If anyone serves me, he must follow me; and where I am, there will my servant be also. If anyone serves me, the Father will honor him.
“Now is my soul troubled. And what shall I say? ‘Father, save me from this hour’? But for this purpose I have come to this hour. Father, glorify your name.” Then a voice came from heaven: “I have glorified it, and I will glorify it again.” The crowd that stood there and heard it said that it had thundered. Others said, “An angel has spoken to him.” Jesus answered, “This voice has come for your sake, not mine. Now is the judgment of this world; now will the ruler of this world be cast out. And I, when I am lifted up from the earth, will draw all people to myself.” He said this to show by what kind of death he was going to die. So the crowd answered him, “We have heard from the Law that the Christ remains forever. How can you say that the Son of Man must be lifted up? Who is this Son of Man?” So Jesus said to them, “The light is among you for a little while longer. Walk while you have the light, lest darkness overtake you. The one who walks in the darkness does not know where he is going. While you have the light, believe in the light, that you may become sons of light.”
When Jesus had said these things, he departed and hid himself from them.  (John 12:1-36)

Collect of the Day:
Almighty God, grant that in the midst of our failures and weaknesses we may be restored through the passion and intercession of Your only-begotten Son, who lives and reigns with You and the Holy Spirit, one  God, now and forever.