Mark's thoughts: This is what it will look like when hate speech legislation comes to your pulpit 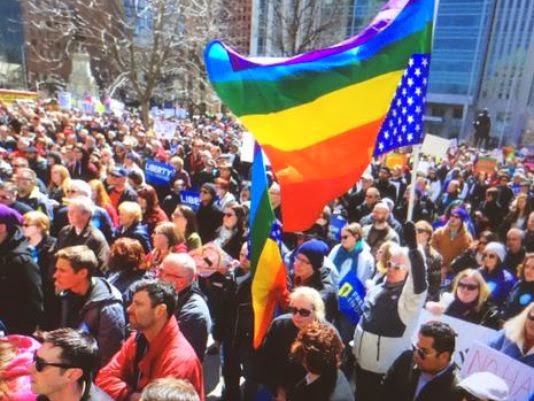 I entered Concordia Seminary, St. Louis in the fall of the 1994-1995 school year in order to study to be a Lutheran pastor.  The previous year, President Bill Clinton had signed the Religious Freedom Restoration Act.  It was a law that had received almost unanimous support in Congress.

I don’t remember thinking all that much about it at the time.  Frankly, there wasn’t much reason that I would have. The protection of the freedom of religion was such a “no-brainer” that almost no one opposed it.  It was an established constitutional right that Americans cherished.

At the end of that school year in 1995, I could not have imagined that twenty years later the events surrounding the Indiana Religious Freedom Restoration Act (RFRA) would be taking place.  There is no need to rehearse here the facts that: 1) it is nothing new and similar laws exist in other states; 2) that it simply provides the mechanism under which people can argue that the government is improperly requiring them to violate their religion; 3) and that it is easy to demonstrate how such laws have aided a whole range of religious beliefs.  Others have done this much better than I can.

What I wish to comment upon is the response that the law has received in the culture.  There, at best, the law is only being described as a “potential means for discrimination against gays.”  More often it is described in ways that are simply false and cast it in the worst possible light.  Businesses are threatening or even taking action to punish the state of Indiana because of the law.

I could not have foreseen this would happen, because I never could have imagined how far and fast the acceptance of homosexuality would progress in our culture.  “Gay marriage” is now the law of my state and many others.  Depending on what the Supreme Court does in the near future, it may soon be the law in every state.  Shaped by the education, entertainment, and media institutions, year by year the belief grows that homosexuality is acceptable, normal and even a good thing.  What is not acceptable, not normal and a bad thing is the belief that homosexuality is wrong.

I very much appreciate the work of those who are making the case for religious freedom.  However, I do not think it is going to prevail.  There is no argument that can sway the person who believes that the homosexual individual never can be refused.  The massive response by the culture that wields media and business as weapons will not allow itself to be defeated. They have the momentum and they are not going to allow anything move in the opposite direction, no matter how small.

Where there used to be freedom of religion, now those who support “gay rights” speak of “freedom of worship.”  The fall back position of the Church in the United States is that we still have the freedom to preach, teach and practice as we wish.  We are assured that we will never be forced to perform homosexual marriages.

The question is how long this will continue.  Those in the homosexual movement are very smart, very motivated and very well funded.  Step by step they have claimed ground. First they said that they just wanted to be “accepted.” Then they said that they wanted to be able to raise children.  Now they are claiming marriage for themselves.  What will be next?

Christianity and the homosexual movement hold diametrically opposed worldviews.  As a Christian, I believe that homosexuality is a sin, and move on.  It saddens me to see people trapped in sin, but it doesn’t impact me personally.  For many in the homosexual movement, the Church’s position is a personal affront. The very existence of the Church’s view presents an existential attack on their identity and the self-perception of their existence.

There is nothing about the history of the homosexual movement that indicates they are going to stop until the antithetical view of the Church is exterminated from public discourse everywhere.  The tool for doing this will be “hate speech legislation” that applies to all including the Church.  This can already be found in Europe and Canada.

Twenty years ago I could not have imagined what is happening today.  I want to believe that freedom of religion is so woven into the American psyche that this scenario can never take place.  But if it happens, what we are seeing this week is what it will look like.  When enough people believe that the biblical view of homosexuality is bigoted, hateful and harmful, arguments about the historical position of religious freedom will count for nothing.

Will that happen?  How long will it take for this to happen?  I don’t know.  I do know that my eighth grade son attends a Roman Catholic school, and when he speaks for the biblical view he finds himself alone - opposed by a large majority in class discussions.  For anyone who has eyes to see and ears to hear, the movement of our culture is clear.  While we should work for the best, we should also be realistic and prepare ourselves for the worst.

I write this on Monday in Holy Week.  It is widely recognized that the Gospel of Matthew makes a great pivot at 16:21 which says, “From that time Jesus began to show his disciples that he must go to Jerusalem and suffer many things from the elders and chief priests and scribes, and be killed, and on the third day be raised” (ESV).  Following his interaction with Peter in 16:22-23, Jesus goes on to say:


If anyone would come after me, let him deny himself and take up his cross and follow me. For whoever would save his life will lose it, but whoever loses his life for my sake will find it. For what will it profit a man if he gains the whole world and forfeits his soul? Or what shall a man give in return for his soul? For the Son of Man is going to come with his angels in the glory of his Father, and then he will repay each person according to what he has done. (Matthew 16:24-27 ESV)

We must be prepared to take up the cross and follow Jesus.  For our brothers and sisters in Africa and Asia this often means the threat of death.  For us living in the United States it will be a question of whether we are willing to speak the truth of God’s word about how he has ordered his creation and receive the legal consequences that go with this.  I don’t believe I will receive a legal penalty for preaching and teaching that homosexuality is sinful.  I am less sure about what will happen to my sons if any of them becomes a pastor.  I can only pray that all of us will find courage in the crucified and risen Lord to speak the truth.