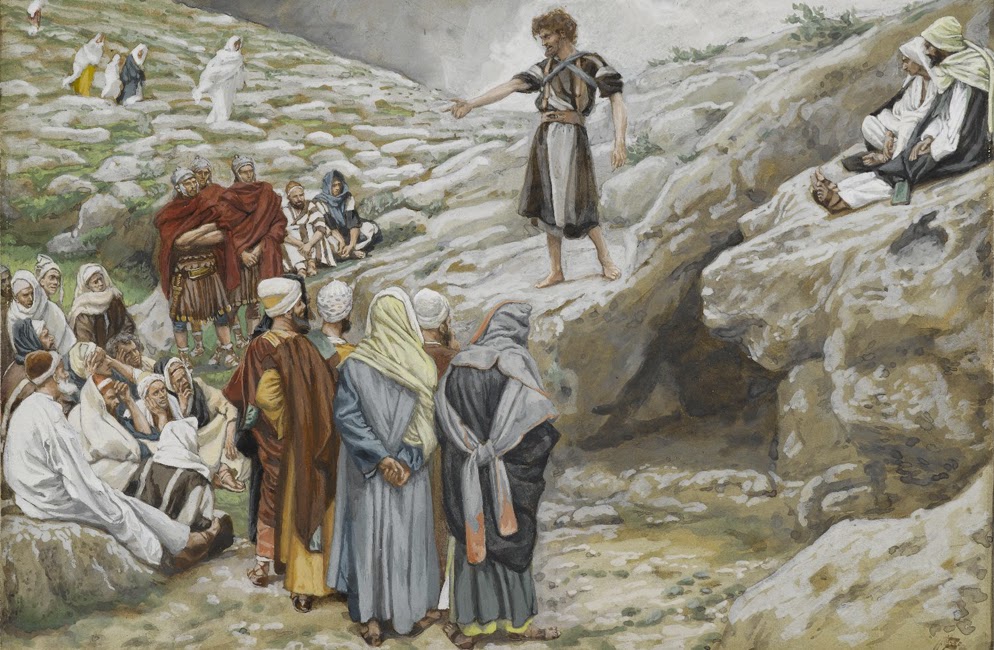 But when he saw many of the Pharisees and Sadducees coming to his baptism, he said to them, “You brood of vipers! Who warned you to flee from the wrath to come? Bear fruit in keeping with repentance. And do not presume to say to yourselves, ‘We have Abraham as our father,’ for I tell you, God is able from these stones to raise up children for Abraham. Even now the axe is laid to the root of the trees. Every tree therefore that does not bear good fruit is cut down and thrown into the fire. (Matthew 3:7-10 ESV)

Recently in catechesis the youth (seventh and eighth graders) and I were looking at Matthew chapter 3 as we considered the ministry of John the Baptist.  I had asked them to describe John the Baptist’s preaching and message. The response from several catechumens was not exactly what I expected.  As they considered the words of John above, they didn’t like them because to several of the youth it seemed like John the Baptist “was discriminating against the Pharisees and Sadducees.”

I was struck by this response and have pondered it since then.  The students who shared the response were bright individuals. They also came from diverse experiences of life in the Church.  There was both the situation in which catechesis during seventh and eighth grade was the first real interaction with life in the Church, and also a life that had included fairly regular attendance at the Divine Service and Sunday school.

There are two observations about this experience that have implications for catechesis in the current setting of the Church.  First, it underscored the need for biblical content to be included in catechesis.  The youth did not realize that the Pharisees and Sadducees were “the bad guys” in the account and therefore they could not understand John the Baptist’s words.  In the case of individuals whose parents had not involved them in the Church (and so had also not emphasized the faith at home), this was not surprising.  But the fact that bright youth who had attended Sunday school and the Divine Service on a fairly regularly basis could miss this basic point did surprise me.

We in the Church recognize that we are living in a time of declining biblical literacy.  However, there are probably occasions when we don’t realize how dramatic the decline is and how broad reaching are its implications.  Fewer and fewer children learn basic biblical accounts at home.  The sole exposure that many will receive is in the readings and preaching of the Divine Service and in Sunday school.  Spotty attendance at both of these means that many will attain only a weak knowledge base, and many will have virtually none.

The youth in catechesis that day left knowing about the Pharisees and Sadducees and why John was speaking to them the way he did.  It was the first time we had bumped into these two groups.  It will not be the last, as during the rest of this school year we will be working through the ministry of Jesus (after completing the central narratives and institutions of the Old Testament during the first half of the year).

Eight years ago I arrived at my current parish and learned that I had inherited a great opportunity.  My predecessor had set in place the expectation that on Wednesday night the seventh and eighth grade youth met for an hour in a classroom setting. Then they met for a half hour with their parents for “Learn by Heart” – catechesis focused on the Catechism that took place in the setting of worship.

I realized that I was guaranteed to be able to cover the basic content of the Small Catechism twice with the catechumens and their parents during the two years of catechesis.  Building on this solid foundation, I decided to have two alternating years of catechesis in the classroom setting.  The first would cover the content of the Small Catechism more deeply and in a way that we want mature  congregation members to understand and confess the faith. The second year would focus on biblical readings. . It would survey the primary biblical narratives of the Old and New Testament. This would bring the individual accounts learned in Sunday School into a unified picture of how God worked out His plan of salvation. Discussion of these narratives would provide the opportunity to teach different doctrinal topics as they appeared in individual texts.  It would seek to teach them to read Scripture in an incarnational and sacramental manner.  Most importantly, it would mean that no one would finish catechesis and be confirmed without obtaining this basic biblical knowledge.

Every setting is different and so the goals of catechesis will be addressed in different ways.  Nevertheless I believe we have arrived at time when catechesis will have to include the foundational biblical narratives.  There was a time when “Confirmation class” typically focused only on the doctrinal content of the Small Catechism as it explained in various texts like the Lutheran Church – Missouri Synod’s Small Catechism with explanation.  It dealt with the kinds of doctrinal topics that would be addressed in the public examination.  However, such an approach is no longer satisfactory. Naturally this content still needs to be taught. But in addition, it is now necessary to teach the foundational biblical accounts as well.  It appears that other pastors have arrived at similar conclusions, because I hear about more and more pastors who include the biblical narrative in their catechesis.

The second observation deals with something that is far more difficult to address. It was disconcerting to hear these youth evaluate the account of John the Baptist using the category of “discrimination.”  Clearly their schooling and culture was teaching them to think in terms of “rights.”  Such an approach reflects the manner in which the homosexual movement has framed questions about sexuality and marriage in terms of “civil rights.”  The one who defines the terms usually wins, and it is frightening to see how our youth are being taught to think.

It is frightening because as the Church, we have so few opportunities to influence the way youth think. When compared with the all encompassing interaction that our culture has with them through school, the media and the entertainment industry, the limited opportunities of the Church can’t begin to compare.  What can we do?

On that day, I taught the youth that John the Baptist’s words had nothing to do with “rights” and discrimination. Instead it was about right and wrong, and so was a matter of Law and Gospel as John proclaimed law in order to bring about repentance so that forgiveness could be received through the Gospel.  As we seek to teach the faith and defend our youth against the culture’s insidious influence on their thought we need to be explicit in diagnosing these contradictory ways of thinking about life.  We need to use opportunities that present themselves to bring into sharp perspective the presuppositions of the world, and then set them in contrast to those of the biblical worldview.  Such an approach does not guarantee success in every case.  But it does seek to be faithful in addressing the realities we face today.
Posted by Surburg's blog at 10:40 AM