Mark's thoughts: The Jerusalem temple, Jesus and the future 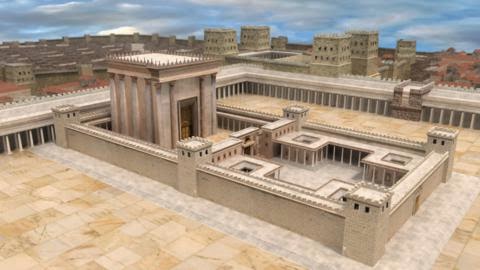 Recently I passed a Christian church that had the message on its sign: “Support our friends in Israel.”  Now on the surface of things this may seem like a very strange message for a church to share.  However because of the theological belief called dispensational millennialism, many Christians believe that the modern nation of Israel has a key role to play in God’s end-time plans.

Dispensational millennialism was created by the Englishman John Nelson Darby (1800-1882) and was then popularized in the United States by Cyrus Scofield (1843-1921), a  pastor in Dallas, who included it in his Scofield Reference Bible (1909; revised 1917).  It has led many Christians to believe that the temple in Jerusalem must be rebuilt in order for God’s end-time plans to unfold.  This assumption leads these Christians to read the Old Testament prophets’ many references to the temple and Mt. Zion on which the temple was located as predictions of a future temple building.  The description provided in Ezekiel 40-48 is understood to be the plan for this new temple (the third temple, after the destruction the temple in 587 B.C. and 70 A.D.).

Dispensational millennialism fails to recognize that all of Scripture is about Jesus Christ.  He is Israel reduced to One and it is in him that the statements about Israel find fulfillment (see for example Matthew 2:13-15). The same thing is true of the temple and this recognition provides the key to understanding much that the Old Testament prophets have written.

In Genesis God’s promised Abraham, “And I will give to you and to your offspring after you the land of your sojournings, all the land of Canaan, for an everlasting possession, and I will be their God” (Genesis 17:8 ESV).  In the patriarchal promise first made to Abraham and then repeated to his descendants, God promised to give the land of Canaan to his people.  The land would be the means by which God would bless his people.  It would be the place where God would be present in the midst of His people.

After entering into the covenant with Israel Yahweh said, “And let them make me a sanctuary, that I may dwell in their midst” (Exodus 25:8 ESV).  The ark of the covenant in the tabernacle became the means by which God located himself in the midst of his people, a fact that was demonstrated as the glory of Yahweh filled the tabernacle when it was erected (Exodus 40:34-38).

While the tabernacle was mobile and was used by God to lead them during their journey, he promised that in the future he would choose one place: “But you shall seek the place that the LORD your God will choose out of all your tribes to put his name and make his habitation there. There you shall go, and there you shall bring your burnt offerings and your sacrifices, your tithes and the contribution that you present, your vow offerings, your freewill offerings, and the firstborn of your herd and of your flock” (Deuteronomy 12:5-6 ESV).

The place was eventually identified as Zion on which the city of Jerusalem was built (2 Samuel 5:5-9).  Solomon built the temple to be God’s dwelling and at its dedication the glory of Yahweh filled the structure, just as it had for the tabernacle (1 Kings 8:10-13).  The temple in Jerusalem was the means by which the Yahweh’s saving presence dwelt in the midst of his people. Because the temple was located on Mt. Zion, all of the biblical truths about God’s saving presence located in the midst of his people are often summarized in the Old Testament by one word: Zion.

Yahweh had chosen to use the temple as the located means of his presence.  However, he was also clear that if Israel was unfaithful and worshiped other gods he would reject the temple and it would be destroyed (1 Kings 9:1-9).  As the sad and unfaithful history of the nation played out, eventually God showed Ezekiel that this was going to happen when the prophet saw the glory of Yahweh leave the temple (Ezekiel 10:4-19; 11:22-25).

God’s judgment arrived in 587 B.C. when he used the Babylonians to destroy the temple and take Judah into exile.  Yet God had promised through Jeremiah that the exile would end (Jeremiah 25:11-12) and through Isaiah that Cyrus would be the instrument for doing this (Isaiah 45:1-4).  Ezra tells us that in fulfillment of this Cyrus the Persian leader who had conquered the Babylonians issued a decree that the exiles could return and rebuild the temple (Ezra 1:1-3).  The Edict of Cyrus in 538 B.C. allowed the Jews to dedicate the rebuilt temple in 516/515 B.C. (Ezra 6:13-18). God worked through the prophets Haggai and Zechariah to see that the second temple was completed (Ezra 5:1-2; 6:13-15).  Expanded and rebuilt in a magnificent way by Herod the Great (74-4 B.C.) the second temple stood at the time of Jesus Christ.

At the beginning of his Gospel John writes about the incarnation of the Son of God: “And the Word became flesh and dwelt among us, and we have seen his glory, glory as of the only Son from the Father, full of grace and truth” (John 1:14 ESV).  The Greek verb that John uses for “dwell” is based on the same root as the word that is used in the Septuagint (the Greek translation of the Old Testament) to translate the Hebrew word “tabernacle.”  In a similar manner, John 1:14’s reference to “glory” recalls how God’s glory filled the tabernacle (Exo 40:34-38).  John is telling us that everything that was true of the tabernacle and temple is now found in Jesus Christ.

But what of the plans for an end-time temple in Ezekiel chapters 40-48?  The center and fulfillment of all of Scripture is Jesus Christ and the blessings that He brings.  When we read the Old Testament we must recognize that it expresses theology in the language of the B.C. setting in which Israel existed.  However, that language must be read in light of the theology it intends to express and the New Testament realities that fulfill this theology – namely Jesus Christ, His Means of Grace and His Body, the Church.

Perhaps the best illustration of this is Ezekiel 47:1-12 which describes water flowing from the temple that issues forth in a lush land filled with life.  It is a picture of the new creation - Eden restored.  Revelation 22:1-5 also describes the river of the water of life, but now it flows from the throne of God and of the Lamb (22:1).   Just before this we learn, “And I saw no temple in the city, for its temple is the Lord God the Almighty and the Lamb” (Revelation 21:22 ESV). What Ezekiel described using the language of the way God worked before Christ is now expressed in the language of the fulfillment that occurred in the incarnation, death and resurrection of Jesus Christ.