Commemoration of Cyprian of Carthage, Pastor and Martyr 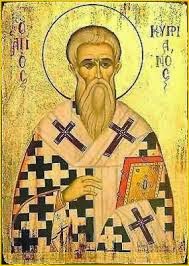 Today we remember and give thanks for Cyprian of Carthage, Pastor and Martyr.  Cyprian (A.D.  ca. 200–258), was acclaimed bishop of the north African city Carthage around 248. During the persecution of the Roman Emperor Decius, Cyprian fled Carthage but returned two years later. He was then forced to deal with the problem of Christians who had lapsed from their faith under persecution and now wanted to return to the Church. It was decided that these lapsed Christians could be restored but that their restoration could take place only after a period of penance that demonstrated their faithfulness. During the persecution under Emperor Valerian, Cyprian at first went into hiding but later gave himself up to the authorities. He was beheaded for the faith in Carthage in the year 258.

Collect of the Day:
Almighty God, You gave Your servant Cyprian boldness to confess the name of our Savior, Jesus Christ, before the rulers of this world and courage to die for the faith he proclaimed.  Give us strength always to be ready to give a reason for the hope that is in us and to suffer gladly for the sake of our Lord Jesus Christ, who lives and reigns with You and the Holy Spirit, one God, now and forever.