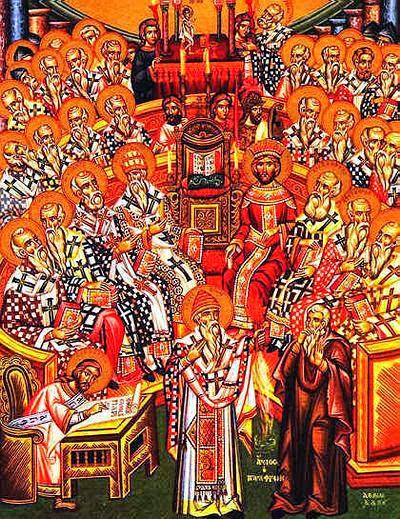 Today we remember the Ecumenical Council of Nicaea that began meeting in the early summer of 325 A.D. at Nicaea, modern day Iznik, Turkey.  The Roman Emperor convened the council in order to address theological questions regarding the Son of God.  The heretic Arius had said that the Son of God was the highest creation of the Father and there had been a time when the Son did not exist. This teaching had greatly disturbed the Church as many were led to believe that the Son was not truly God.  Alexander the bishop of the Egyptian city of Alexandria and especially his deacon and secretary Athanasius (who became bishop in 328 A.D. after Alexander’s death) opposed this teaching and affirmed the biblical truth that the Son is truly God.  The council produced the Nicene Creed which explicitly confessed that the Son is truly God by saying that He is “of one substance with the Father.”

Collect of the Day:
Lord God, heavenly Father, at the first ecumenical Council of Nicaea, Your Church boldly confessed that it believed in one Lord Jesus Christ as being of one substance with the Father.  Grant us courage to confess this saving faith with Your Church through all the ages; through Jesus Christ, our Lord, who lives and reigns with You and the Holy Spirit, one God, now and forever.
Posted by Surburg's blog at 6:59 AM