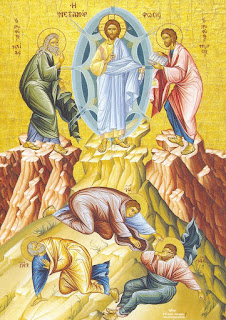 The season of Epiphany is a time of the Church year that sets our attention upon the manner in which Jesus Christ and His saving ministry were revealed to the world.  In the visit by the magi, the baptism of Jesus and in the miracle at Cana the saving glory of Christ was made known.  This theme of light, glory and revelation reaches a crescendo as we celebrate the Feast of the Transfiguration of Our Lord.

The Gospel lesson for that day is Matthew 17:1-9. At the end of chapter sixteen, Peter had just confessed that Jesus is “the Christ, the Son of the living God” (16:16).  Our Lord then proceeded to predict His passion for the first time as Matthew tells us: “From that time Jesus began to show his disciples that he must go to Jerusalem and suffer many things from the elders and chief priests and scribes, and be killed, and on the third day be raised” (16:21).

The end of chapter sixteen presents a paradox: Jesus is the Christ, the Son of God; and Jesus will suffer and die.  We may wonder if this can really be true.  Immediately after this, we hear about the transfiguration.  Jesus takes Peter, James and John up on a mountain and then Matthew tells us, “And he was transfigured before them, and his face shone like the sun, and his clothes became white as light.”  Jesus shines forth in divine glory in an event that leaves no doubt about whether He is the Son of God.  Then, a bright cloud overshadows them and God the Father says, “This is my beloved Son, with whom I am well pleased; listen to him.”

This statement by the Father returns us to the beginning of the season of Epiphany, for on the first Sunday after the Epiphany – the Baptism of Our Lord – we heard these same words spoken at Jesus’ baptism.  At that time those words drawn from Isaiah 42:1 identified Jesus as the Servant of the Lord who is also the suffering Servant (see Isaiah 53).  At the transfiguration, even as Jesus shines forth on divine glory He is identified as the One who will suffer and die.  The transfiguration confirms that yes Jesus is the Christ, the Son of God; and yes, Jesus will suffer and die.

The Transfiguration of Our Lord brings Epiphany to a crescendo as Jesus shines forth in glory.  And at the same time it also points to Jesus’ suffering and death.  In doing so it marks the end of Epiphany and signals that Lent and Holy Week are coming.

In the one year lectionary, the season of Pre-Lent provides a gradual transition from Epiphany to Lent. The three Sundays during this time are known by the Latin word for 70, 60 and 50: Septuagesima, Sexagesima and Quinquagesima.  In round figures these names signal the amount of time before Easter. This preparatory time for Lent was established in Rome before the end of the sixth century and spread throughout the western Church.

The “Farewell to Alleluia” occurs on the Transfiguration of Our Lord and so this word is omitted from the Divine Service.  However, the color for the season remains green. There is a spiritual logic to this season of Pre-Lent.  A similar practice of Pre-Lent exists in the Orthodox tradition.  In writing about this, the Orthodox scholar Alexander Schmemann observed: “Knowing our lack of concentration and the frightening ‘worldliness’ of our life, the Church knows our inability to change rapidly, to go abruptly from one spiritual or mental state to another.  Thus, long before the actual effort of Lent is to begin, the Church calls our attention to its seriousness and invites us to meditate on its significance” (Great Lent: Journey to Pascha, 17).

This coming Sunday, we will celebrate the Transfiguration of Our Lord in the one year lectionary as we see Christ’s glory shine forth.  In that event we will also be pointed forward to the passion that is to come. Yet before we enter directly into the rigor of Lent, we will pass through “the Gesima Sundays” as we are prepared for the time that leads to Holy Week.