Mark's thoughts: Facing the world's antipathy once again, through faith in Christ 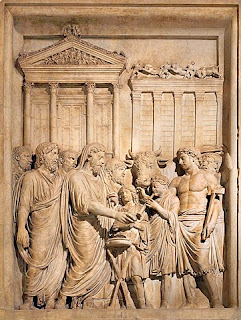 We are well aware that we live in a time that is very different from what it was before.  As you read this, we are just leaving “Pride Month” in which we have been swamped by our culture’s virtue signaling as it celebrated homosexuality and transgenderism.  We know that the percentage of the population that identifies as Christian, much less actually practices the faith, is declining.  More than that, we know that our culture is increasingly antagonistic toward the Church and the Christian faith.

These changes, and the speed with which they have been occurring, can be the source of deep concern. They are certainly not what we want to see happening.  However, we need to recognize that they are also not something that is completely new for Christ’s Church. We need to be reminded about what our brothers and sisters in Christ faced during the first centuries of the Church’s existence.  We learn from this that the Church has faced this before. We also find encouragement that the Spirit of Christ sustained the Church in the midst of those things, and even caused her to grow.

In his book Destroyer of the gods: Early Christian Distinctiveness in the Roman World, the scholar Larry Hurtado lays out the evidence for how the Roman world’s reaction to Christianity was unprecedented. While different religious groups may have fallen out of favor and been repressed for a time, this did not continue and they were allowed to be present and practice again.  However, Hurtado notes that when it comes to Christianity, “the combination of popular abuse, cultured critique, and official repression across the better part of three centuries, locally at first and the empire-wide toward the end, has no parallel” (pg. 35).

Christians attracted a unique antipathy from pagans around them.  When the Roman writer Tacitus (around 112 A.D.) described how in 64 A.D. the emperor Nero blamed the Christians for the fire that destroyed much of Rome and killed many of them, Tacitus referred to Christians as “hated for their abominations” and described them as promoting “a deadly superstition” (pg. 21).  Christianity was classified by Romans not as a “religion” (something that was acceptable to society), but as a “superstition” which meant that it was unacceptable and even dangerous.

Around 110 A.D. Pliny, who was the imperial ruler in Bithynia and Pontus (Asia Minor, what is today Turkey) wrote to the Emperor Trajan about how he was handling people who were being denounced as Christians.  Pliny said that if they renounced Christianity making prayer to the gods and cursing Christ they were set free.  Non-Roman citizens who refused to do so were executed, while Roman citizens were sent to Rome for trial (pg. 22-23). What is notable is that Christians were considered worthy of death, simply because they were Christians.

Why did Christians attract this unprecedented response?  In order to understand a key reason, we must recognize that while we are able to separate religion from secular life, there was no such distinction in the ancient world.  Instead, the gods were part of every aspect of life.  This was true in the home, in social gatherings, in the city and in the empire.  The well being of life on all of these levels required reverence for the gods.

However, Christians refused to worship or take part in the rituals and worship of the gods. Paul reported about the Thessalonians: “you turned to God from idols to serve the living and true God, and to wait for his Son from heaven, whom he raised from the dead, Jesus who delivers us from the wrath to come” (1 Thessalonians 1:9-10).  As this statement indicates, not only did Christians stop worshipping the pagan gods, they declared that these gods were mere idols.  They weren’t real. Paul stated this shared understanding when he wrote in 1 Corinthians 8:4, “we know that ‘an idol has no real existence,’ and that ‘there is no God but one.’”

When a person converted to faith in Christ and began to live in this way, it caught the attention of others.  Hurtado observes:

Christians were willing to do this because they knew that Jesus Christ is the crucified and risen Lord.  Through him they had forgiveness and salvation.  Paul told the Romans, “if you confess with your mouth that Jesus is Lord and believe in your heart that God raised him from the dead, you will be saved” (Romans 10:9).  They knew that God had defeated death through Jesus, and that our Lord will raise us from the dead on the Last Day.  Paul wrote to the Corinthians, “But in fact Christ has been raised from the dead, the firstfruits of those who have fallen asleep. For as by a man came death, by a man has come also the resurrection of the dead. For as in Adam all die, so also in Christ shall all be made alive. But each in his own order: Christ the firstfruits, then at his coming those who belong to Christ” (1Corinthians 15:20-23).

This is the same confidence that we have.  God’s Spirit has called us to faith through the Gospel – the good news about the death and resurrection of Jesus Christ for us.  God “has caused us to be born again to a living hope through the resurrection of Jesus Christ from the dead” (1 Peter 1:3). We have received God’s love in Christ, and we know that nothing can separate us from that love.

Christians have faced the world’s disdain and hatred before.  God sustained the Church in the face of this.  He will do the same in our days as well. We know this because we have faith in Jesus Christ.  As Paul told the Romans at the end of chapter eight:

What then shall we say to these things? If God is for us, who can be against us? He who did not spare his own Son but gave him up for us all, how will he not also with him graciously give us all things? Who shall bring any charge against God's elect? It is God who justifies. Who is to condemn? Christ Jesus is the one who died--more than that, who was raised--who is at the right hand of God, who indeed is interceding for us. Who shall separate us from the love of Christ? Shall tribulation, or distress, or persecution, or famine, or nakedness, or danger, or sword? As it is written, “For your sake we are being killed all the day long; we are regarded as sheep to be slaughtered.” No, in all these things we are more than conquerors through him who loved us. For I am sure that neither death nor life, nor angels nor rulers, nor things present nor things to come, nor powers, nor height nor depth, nor anything else in all creation, will be able to separate us from the love of God in Christ Jesus our Lord. (Romans 8:31-39).