Mark's thoughts: The life of faith on the road between two ditches - Paul on Justification and Living as Christians 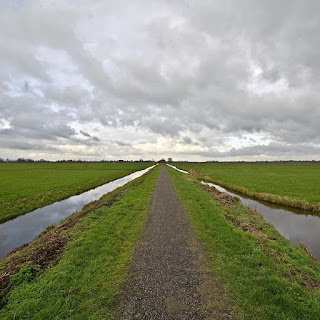 Christian theology and life is lived on a road between two ditches.  On the one side is the ditch that says we must do something in order to receive salvation. This was, of course, the heart of the Reformation struggle to return the Gospel in its truth and purity to the center of the Church’s life.

It’s not surprising that this is a continual temptation for the Church.  After all, we have the law written on our heart – we are “hard wired” to perceive God’s law.  And we know how the Law works – you must do something to get something. There is no such thing as a free lunch.

At the same time, the idea of doing something plays to the vanity of the old man in us. He doesn’t believe that he is blind, dead, and an enemy of God.  Instead led by him – the continuing presence of the sinful nature within us – we want to believe that we can do something in relation to God. We want to believe this good about ourselves.  And on top of this we also can then be proud that we get some credit for the role that we are able to play.

This is accomplished in different ways. In the medieval Church, and continuing in Roman Catholic theology of today, the grace given to us by God makes possible our doing that is part of the reason we receive full salvation.  Many of the forms of Protestantism around us firmly reject this view.  But instead, they place our doing in the work of conversion.  Here, I have the role of deciding by my own powers to believe in Jesus.  In various ways – such as “giving one’s testimony” – this action by the individual becomes a focal point of the Christian life.

The ditch on the other side of the road exists because a person knows with absolute certainty that they are forgiven and saved by God’s grace, on account of Christ, through faith. We know that we are forgiven, and since that is the case there is no real need to worry about how we live. Sure we may sin, but that’s why Jesus died for us – so that sin is forgiven! Here, any talk about how Christians are to live is labeled as “works righteousness” and is considered a threat to the Gospel.  Unfortunately, this is an outlook that has been common in modern Lutheranism.

In his letter to the Romans, the apostle Paul shows us the that the Christian faith is lived by staying on the road between those two ditches.  So in chapter three he has explained why the doing of the law can never be the means by which are justified before God.  He has shown that “all, both Jews and Greeks, are under sin” (3:9). They are under sin’s power.  For this reason he says, “Now we know that whatever the law says it speaks to those who are under the law, so that every mouth may be stopped, and the whole world may be held accountable to God. For by works of the law no human being will be justified in his sight, since through the law comes knowledge of sin” (3:19-20).

Instead of the law and doing, forgiveness and justification are God’s gift. And so Paul goes on to say, “But now the righteousness of God has been manifested apart from the law, although the Law and the Prophets bear witness to it-- the righteousness of God through faith in Jesus Christ for all who believe. For there is no distinction: for all have sinned and fall short of the glory of God, and are justified by his grace as a gift, through the redemption that is in Christ Jesus, whom God put forward as a propitiation by his blood, to be received by faith” (3:21-25).

But in chapter six, the apostle declares that the certainty of justification by grace through faith does not mean that we cease to struggle against sin.  He says, “What shall we say then? Are we to continue in sin that grace may abound? By no means! How can we who died to sin still live in it?” (6:1-2).

Paul says the reason for this is because of our baptism into the death of the risen Lord. He goes on to say, “Do you not know that all of us who have been baptized into Christ Jesus were baptized into his death? We were buried therefore with him by baptism into death, in order that, just as Christ was raised from the dead by the glory of the Father, we too might walk in newness of life" (6:3-4).  The apostle ties together the resurrection of Jesus and the life we now live as Christians.  He does this because the Spirit who raised Jesus from the dead is the One who is now at work in us. He has given us regeneration.  He has made us a new creation in Christ.  The Spirit leads us and gives us the strength we need to live according to God’s will.

Salvation in Christ is purely God’s gift.  Faith in Christ is purely God’s gift.  We have nothing to do with either. But when it comes to living as Christians, Paul is clear that this does involve us – our decisions, our effort, our choices.  It is the Spirit who makes this possible, and the Spirit who leads, but we must also follow. That is why Paul writes in 6:12-13: “Let not sin therefore reign in your mortal body, to make you obey its passions. Do not present your members to sin as instruments for unrighteousness, but present yourselves to God as those who have been brought from death to life, and your members to God as instruments for righteousness.”

The apostle wants us to know that we are never free. We are either slaves to sin, or slaves to God and his righteousness.  These lead to very different outcomes. The apostle asks, “Do you not know that if you present yourselves to anyone as obedient slaves, you are slaves of the one whom you obey, either of sin, which leads to death, or of obedience, which leads to righteousness? (6:16).

In the very next verse Paul defines this obedience as he says, “But thanks be to God, that you who were once slaves of sin have become obedient from the heart to the standard of teaching to which you were committed, and, having been set free from sin, have become slaves of righteousness” (6:17).  In an interesting turn of phrase the apostle does not say that they become obedient to the standard of teaching that was handed over to them.  Instead, he says that the believers have been handed over or committed to the teaching.

This is all true. And Paul lets us know that because this is true we cannot allow ourselves to fall into the ditch of thinking that forgiveness means we are free to live as we like.   He says: “For just as you once presented your members as slaves to impurity and to lawlessness leading to more lawlessness, so now present your members as slaves to righteousness leading to sanctification” (6:19).  We are to present our bodies and lives as slaves to God’s righteousness – his right way of doing things.

It is the Spirit who makes this possible – the Spirit who gave us new life in baptism.  Presenting ourselves to righteousness means resisting the old man and all that he wants us to do.  As Paul says in chapter eight: “For if you live according to the flesh you will die, but if by the Spirit you put to death the deeds of the body, you will live. For all who are led by the Spirit of God are sons of God” (8:13).

In the latter portion of chapter six, the apostle uses the language of “slavery.”  He says, “For when you were slaves of sin, you were free in regard to righteousness. But what fruit were you getting at that time from the things of which you are now ashamed? For the end of those things is death. But now that you have been set free from sin and have become slaves of God, the fruit you get leads to sanctification and its end, eternal life” (6:21-22).

Slaves of sin or slaves of God - those are the only two options that are available. The one leads to death. The other produces fruit because it is God’s Spirit – the Spirit of Christ – who is at work in us.  This fruit results in sanctification – a life lived according to God’s will.  And Paul says that this has as its end, eternal life.

You were buried with Jesus by baptism into death, in order that, just as Christ was raised from the dead by the glory of the Father, you too might walk in newness of life.  Those who have received the Gospel follow the Spirit’s leading.  By the Spirit’s power they present themselves to God as those who have been brought from death to life, and their members to God as instruments for righteousness.  This produces the fruit of sanctification and has as its end, eternal life.

Seeking to live according to God’s will is a simply part of the life of faith – the life in Christ.  It is part of the life that the results in eternal life.  It cannot be otherwise, because this is the life of the Spirit who has called us to faith and sustains us as the children of God.

Yet after emphasizing this truth throughout this portion of chapter six, the apostle ends the chapter in a way that makes it absolutely clear that this life is not the reason we are saved.  Paul writes, “For the wages of sin is death, but the free gift of God is eternal life in Christ Jesus our Lord.” (6:23).  The wages of sin is death.  Paul uses the word “wages” here because sin earns its “reward.” Sin brings death, and people have been “earning” those wages by sin ever since the Fall of Adam and Eve.

But the apostle tells us that eternal life in Christ Jesus is completely different.  This is a free gift.  It is completely unmerited and undeserved.  It has been won by the death and resurrection of Jesus.  It is received by the faith the Holy Spirit has created.  Our doing has nothing to do with why we are saved.  It is God’s grace given us in Christ.  It is God’s grace given us through the Spirit.  And because this is so, we who live in Christ by the Spirit do not present our members to sin as instruments for unrighteousness, but present ourselves to God as those who have been brought from death to life, and our members to God as instruments for righteousness.