Mark's thoughts: "Let me give you my testimony" 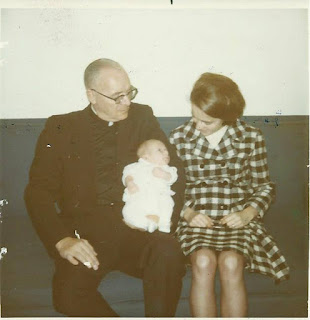 When I accepted a call to Good Shepherd Lutheran Church in Marion, Illinois, I knew that I was moving to southern Illinois.  What I did not understand at the time, was that for all intents and purposes I was moving into the “Bible belt.”  If you drive about an hour northwest of Marion you encounter the leading edge of territory that is heavily Lutheran and Roman Catholic. But here in Marion, and as you continue south, Lutherans and Roman Catholics are a foreign entity.  Instead, this is the home of Baptists, Methodists, Pentecostals and non-denominational churches that are largely Baptist in theology.

The move from inner suburban Chicago was quite a culture shock.  My wife encountered this in a very striking manner.  When she took our small twin children to play with other children, she visited with the moms.  They were all Christian, yet soon she reported something odd.  They asked questions about when a person had been born again or become a Christian.  Of crucial importance for them was the need to give their “testimony.”  They seemed to feel the need to return again and again to the story about their “conversion experience.”  It could not be spoken and heard too many times.

When I received my first call to an area that had a large Roman Catholic population, I read the Catechism of the Catholic Church so that I could understand what they believed as I interacted with them.  I turned now to do the same thing as I sought to understand the Arminian, Zwinglian, Calvinistic and Pentecostal underpinnings of the beliefs I was encountering.

As I read, it dawned on me that having rejected the sacraments as the means by which God creates and sustains faith, this belief system had substituted the testimony recounting conversion.  Deprived of the certainty provided by God’s action in Holy Baptism, they had created a “faux sacrament” – the recounting of the conversion experience again and again was a means to affirm that it really had happened, that their faith was real and that they were really Christians.

It was therefore with great interest that I read this piece by G. Shane Morris.  An evangelical who has come to believe in infant baptism, he describes how the “sacrament of conversion” functions in the evangelical belief system as a replacement for the Sacrament of Holy Baptism.  Thanks to Gene Veith for calling attention to it.

The "sacrament of conversion" is a replacement for the sacraments instituted by Christ. This move is prompted by the rejection of the sacraments as means by which God actually creates and sustains faith, and gives forgiveness. The cause for this is a hermeneutic that has been established upon a Platonic dualistic worldview.
Posted by Surburg's blog at 8:27 AM