Mark's thoughts: What should we say about a Christian funeral? 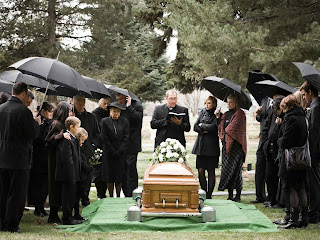 “Funeral services are for the living, not for the dead.”  At least, that is what people often say these days.  There is, of course, an element of truth to this.  It is the living who gather at church, speak the words of the funeral liturgy, sing the hymns and listen to the sermon. They do receive comfort.

“A funeral is a celebration of life.” At least, that is what people often say these days. There is, of course, also an element of truth to this.  We do remember the life of the one who has died and give thanks for the blessings that have been present.  The Collect of the Day at the beginning of the funeral service says: “O God of grace and mercy, we give thanks for Your lovingkindness shown to  name  and to all Your servants who, having finished their course in the faith, now rest from their labors.”

The bodily nature of human life must govern our thoughts about a funeral.  We learn in Genesis chapter two that, “the LORD God formed the man of dust from the ground and breathed into his nostrils the breath of life, and the man became a living creature” (Genesis 2:8).  We are body and soul (Matthew 10:28).  We have a body and we have a soul – a personal existence that continues after death.  Yet God created us as the unity of body and soul, and only in that unity can we live the life God intends for us; the life that is “very good” (Genesis 1:31).

The body of a Christian is no less that individual than the soul.  It is not merely “a shell” that once contained what really mattered but is now of no more importance. Instead, the body is God’s creation, just as the soul is.  It is the person too.  The fact that the soul has been rent from body in death is a result of sin (Romans 6:23). But because of Jesus Christ’s resurrection, we know that God is not done with that body. The placement of the funeral pall at the beginning of the funeral service is accompanied by these words:

Do you not know that all of us who have been baptized into Christ Jesus were baptized into his death? We were buried therefore with him by baptism into death, in order that, just as Christ was raised from the dead by the glory of the Father, we too might walk in newness of life. For if we have been united with him in a death like his, we shall certainly be united with him in a resurrection like his. (Roman 6:3-5).

Every worship service is an act of confession. We attend a church whose worship confesses what we believe, for what we say and do in worship is the most powerful confession.  It shapes and forms what people actually believe. Indeed, a church that worships in a way that deviates from her confession will eventually find herself believing something different. A funeral service is therefore a Christian’s final confession.  The order of service, the Scripture readings, the hymns sung, and the rite of committal used at the grave site all confess what that individual believed. This is not to be taken lightly, and it is not to be taken away from the believer who died in Christ by others who do not share in that confession.  If Christ and the faith we believe and confess is the most important thing in our life, than no greater disrespect can be rendered to a person who has died than to conduct a funeral that does not confess what that Christian did during life.

A Christian funeral looks at death, and calls it what it is.  It has been caused by sin.  It is not very good. It is not what God intended for us.  It is the work of the devil who is a murderer (John 8:44)

But a Christian funeral is indeed a celebration of a different kind of life.  It is a celebration of the resurrection life of Jesus Christ, and what this means for the Christian who has died. Jesus said, “I am the resurrection and the life. Whoever believes in me, though he die, yet shall he live, and everyone who lives and believes in me shall never die” (John 11:25).

At the same time, Jesus’s resurrection is the firstfruits of the resurrection that all Christians will experience (1 Corinthians 15:23). The risen and ascended Lord will return in glory to raise up our bodies.  Paul tells us that, “we await a Savior, the Lord Jesus Christ, who will transform our lowly body to be like his glorious body, by the power that enables him even to subject all things to himself” (Philippians 3:21). This is the life that we celebrate at a Christian funeral. And so the final pastoral act for a congregation member is when the pastor places his hand on the head of the casket and says: “May God the Father, who created this body; may God the ╬ Son, who by His death redeemed this body; may God the Holy Spirit, who by Holy Baptism sanctified this body to be His temple, keep these remains to the day of the resurrection of all flesh.”