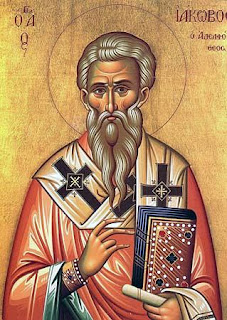 James, a servant of God and of the Lord Jesus Christ,

To the twelve tribes in the Dispersion:

Heavenly Father, shepherd of Your people, You raised up James the Just, brother of our Lord, to lead and guide Your Church.  Grant that we may follow his example of prayer and reconciliation and be strengthened by the witness of his death; through Jesus Christ, Your  Son, our Lord, who lives and reigns with You and the Holy Spirit, one  God, now and forever.