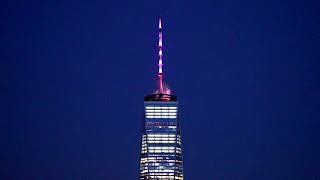 I have found the celebration surrounding the abortion law signed by New York Governor Andrew Cuomo to be particularly sickening.  This law states that babies can be killed at any time right up to the moment of birth if the mother’s health is at risk.  However, since “health” is defined to include any physical, emotional or family factors that affect “well-being,” the law provides the ability to kill any baby.

The mind reels in seeking to understand how a person can accept this, much less celebrate it.  Yet the attention the New York law has received can cause us to overlook the fact that twenty three states – including Illinois where I live – already have such a law on the books.  Seven other states allow abortion at any time before birth, without even requiring the justification of the threat to a mother’s “health.”

We have recently seen another anniversary of the Roe v. Wade decision come and go.  While there are many signs that real progress is being made to end abortion, the signing of the New York law at the time of the anniversary was a slap in the face – an ugly reminder that this unspeakable evil continues and has powerful people who seek to support and advance abortion.

For me personally, this is a source of great frustration.  And so it was helpful to come across Psalm 10 again in my personal devotions as I continue reading through the Psalms.  The psalmist begins by asking the question we ask: “Why, O LORD, do you stand far away? Why do you hide yourself in times of trouble?” (10:1).  It can seem as if God does not care about this evil of abortion – the killing of babies.  The psalmist goes on describe the evil he sees and the people who do it:


In arrogance the wicked hotly pursue the poor; let them be caught in the schemes that they have devised. For the wicked boasts of the desires of his soul, and the one greedy for gain curses and renounces the LORD. In the pride of his face the wicked does not seek him; all his thoughts are, “There is no God.” His ways prosper at all times; your judgments are on high, out of his sight; as for all his foes, he puffs at them. He says in his heart, “I shall not be moved; throughout all generations I shall not meet adversity.” His mouth is filled with cursing and deceit and oppression; under his tongue are mischief and iniquity. He sits in ambush in the villages; in hiding places he murders the innocent. His eyes stealthily watch for the helpless; he lurks in ambush like a lion in his thicket; he lurks that he may seize the poor; he seizes the poor when he draws him into his net. The helpless are crushed, sink down, and fall by his might. He says in his heart, “God has forgotten, he has hidden his face, he will never see it.” (10:2-11)

We see an evil like abortion, and we want God to act. The psalmist calls for this too.  He says, “Arise, O LORD; O God, lift up your hand; forget not the afflicted. Why does the wicked renounce God and say in his heart, ‘You will not call to account’?” (10:12-13).

The circumstances make it appear like God does not care.  Left to ourselves, it would be easy to drift into cynicism and hopelessness about the evils of the world.  That is why the psalms are so important for us.  They are prayers to God in which we find our own thoughts and emotions expressed.  However, they are also inspired prayers.  They are prayers from God that reveal how we should think and speak as Christians.

Very often in psalms that lament the fallen circumstances of the world, the psalmist ends with a statement of faith.  In Psalm 10 the psalmist begins by asserting that God does notice.  He writes, “But you do see, for you note mischief and vexation, that you may take it into your hands; to you the helpless commits himself; you have been the helper of the fatherless” (10:14).  The evildoer may say that there is no God (10:4) or that he will never be called to account (10:13).  But God is God, and nothing escapes him.  He does take note.  The psalmist calls God to act upon this: “Break the arm of the wicked and evildoer; call his wickedness to account till you find none” (10:15).

The psalmist doesn’t see this happening.  That is the reason for the psalm.  But he concludes with this note of confidence in God: “The LORD is king forever and ever; the nations perish from his land. O LORD, you hear the desire of the afflicted; you will strengthen their heart; you will incline your ear to do justice to the fatherless and the oppressed, so that man who is of the earth may strike terror no more” (10:17-18).

The psalmist says that Yahweh is the king forever. He is the king who reigns (Psalm 93:1; 96:10; 97:1), and so he is the king who judges. As the previous Psalm stated: “But the LORD sits enthroned forever; he has established his throne for justice, and he judges the world with righteousness; he judges the peoples with uprightness” (Psalm 9:7-8; see also 96:12-13; 98:8-9).  In faith, the psalmist declares that Yahweh will hear the afflicted and strengthen them (10:17).  He will do justice to the oppressed and act so that the evildoers strike terror no more (10:18).

In spite of present circumstances, the psalmist expresses faith in God’s character and what he will do.  Evil wins, but evil cannot have the last word.  We have the same confidence, yet now it is a confidence based on the end time action of God in his Son, Jesus Christ.  Jesus brought the reign of God into this world (Mark 1:14; Matthew 12:28).  By his death on the cross and resurrection from the dead he has conquered sin, evil and death for us. Through faith and baptism we have been delivered from the righteous judgment that we deserved and are forgiven sinners – saints.

Jesus is the king, the righteous judge (Matthew 25:31; 2 Corinthians 5:10).  The ascended and exalted Lord will return, and those who do not repent; those who cling to their sin by celebrating the death of babies and promoting it will receive his judgment. The killing will end and eternal life will triumph.  Evil and those who do it cannot win, because in Christ they have already lost.