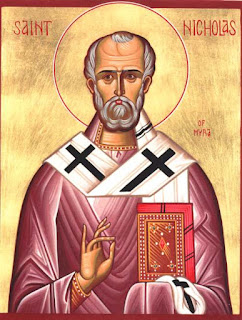 Collect of the Day:
Almighty God, You bestowed upon your servant Nicholas of Myra the perpetual gift of charity.  Grant Your Church the grace to deal in generosity and love with children and with all who are poor and distressed and to plead the cause of those who have no helper, especially those tossed by tempests of doubt or grief.  We ask this for the sake of Him who gave His life for us, your Son, our Savior, Jesus Christ, our Lord, who live and reigns with You and the Holy Spirit, one God, now and forever.
Posted by Surburg's blog at 6:31 AM