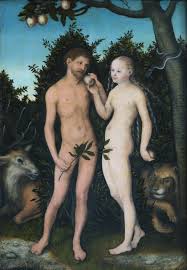 Adam was the first man, made in the image of God and given dominion over all the earth (Gen 1:26). Eve was the first woman, formed from one of Adam’s ribs to be his companion and helper (2:18–24). God placed them in the Garden of Eden to take care of the creation as his representatives. But they forsook God’s Word and plunged the world into sin (3:1–7). For this disobedience God drove them from the Garden. Eve had to suffer the pain of childbirth and be subject to Adam; Adam had to toil amid thorns and thistles and return to the dust of the ground. Yet God promised that the woman’s Seed would crush the serpent’s head (3:8–24). Sin had entered God’s perfect creation and changed it until God would restore it again through Christ. Eve is the mother of the human race, while Adam is representative of all humanity and the Fall, as St. Paul writes, “For in Adam all die, so also in Christ shall all be made alive” (1 Cor. 15:22).