Mark's thoughts: Lessons from Monica about family members who are not Christians 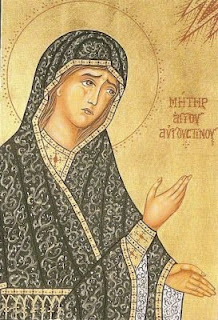 Monica was the mother of St. Augustine.  No theologian has had more influence on the Church than Augustine.  The fascinating thing about Augustine is that he was not always a Christian, even though he had been raised by a Christian mother.  He wandered in a life of lust, and then also in a false religion, before he returned fully to the Christian faith.  In his book Confessions Augustine writes about this journey, and in particular focuses on the role that his mother Monica had in bringing him to Christ.

Monica was born in Thagaste, North Africa in 331 A.D.  She was raised in a Christian family, but it was an elderly servant who fostered a profound faith in Jesus Christ as she cared for Monica.  Her family arranged for a marriage to man name Patricius who was not a Christian.  Augustine describes him as a kind individual, but also says that he had a bad temper that could erupt in anger.  As a pagan who followed what the culture considered acceptable for a husband, he was unfaithful to Monica.

Augustine was born in 354 A.D.  Christianity had only become legal in 313 A.D. and the Church was in the process of bringing large numbers of converts into the faith.  A belief had arisen that baptism only forgave sins committed prior to receiving the sacrament.  Forgiveness for sins committed after baptism required a very difficult public process of penance.  It became a common practice for people to enter the catechuemnate, but then not to receive baptism for years and even decades.  They did this because a catechumen was considered part of the Church, but because he or she was not baptized, the individual was not expected to undertake all of the demands of living as a Christian.  Many people wanted to put off baptism as long as they could, so that it would forgive as many sins as possible.

Augustine became a catechumen in his early teens.  He said of Monica, “My earthly mother was deeply anxious, because in the pure faith of her heart, she was in greater labor to ensure my eternal salvation than she had been at my birth” (Confessions 1.11).  Augustine describes those early years as a contest in which Monica worked against Patricius in order to keep Augustine in the Christian faith:


Even at that age I already believed in you, and so did my mother and the whole household except for my father.  But, in my heart, he did not gain the better of my mother’s piety and prevent me from believing in Christ just because he still disbelieved himself.  For she did all she could to see that you, my God, should be a Father to me rather than he” (Confessions 1.11).

However as Augustine became a young man he became ensnared in a lustful life.  Eventually he even took a concubine and had a child with her named Adeodatus.  Augustine had a brilliant mind and he excelled in rhetoric, which was the most important subject in the late antique world.  He also found himself seeking answers in the religion Manichaeism which had come from Persia. This dualistic religion taught that the world had been created by an evil god and offered salvation in an escape from this world and a return to the light.

Monica was distraught to see her son leave the Christian faith.  Augustine tells us that his mother prayed earnestly for him:


But you sent down your help from above and rescued my soul from the depths of this darkness because my mother, your faithful servant, wept to you for me, shedding more tears for my spiritual death than other mothers shed for the bodily death of a son.  For in her faith and in the spirit which she had from you she looked on me as dead. You heard her and did not despise the tears which streamed down and watered the earth in every place where she bowed her head in prayer. (Confessions 3.11)

Monica sought to help her son, such as when she asked a priest to speak with Augustine and show him the errors of Manichaeism as he had with other young men.  The priest had himself been caught up in the false religion when he was younger, and so was well equipped to help others.  However Augustine reports:


He often did this when he found suitable pupils, but he refused to do it for me – a wise decision, as I afterwards realized.  He told her I was unripe for instruction because, as she had told him, I as brimming over with the novelty of the heresy and had already upset a great many people with my casuistry. ‘Leave him alone,’ he said. ‘Just pray to God for him. From his own reading he will discover his mistakes and the depth of his profanity’ (Confessions 3.12).

Unwilling to accept this, she persisted all the more in asking the priest to speak to Augustine.  Augustine tells us, “At last he grew impatient and said, ‘Leave me and go in peace.  It cannot be that the son of these tears should be lost’” (Confessions 3.12).

Augustine went to Rome and then to Milan in order to teach rhetoric.  Out of concern for her son’s spiritual well being, Monica followed him.  It was in Milan that God used the timing and circumstances of Augustine’s life to bring him back to Christ.  As the priest had predicted, Augustine had finally seen through the lies of Manichaeism.  He was still searching for answers.  Ambrose, the bishop of Milan, was an intellectual, an excellent speaker and an impressive personality.  Augustine went to hear him preach, at first, just because he appreciated Ambrose’s rhetorical skill. But as he listened the content began to impact him.  In July 386 Augustine heard Romans 13:13-14, “Let us walk properly as in the daytime, not in orgies and drunkenness, not in sexual immorality and sensuality, not in quarreling and jealousy. But put on the Lord Jesus Christ, and make no provision for the flesh, to gratify its desires.” This text at that moment in his life led Augustine to commit fully to the life of faith.  He was baptized at the Vigil of Easter in 387 A.D.  Monica was overjoyed and Augustine writes, “she was jubilant with triumph and glorified you, who are powerful enough, and more than power enough, to carry out  your purpose beyond all our hopes and dreams [Ephesians 3:20]” (Confessions 8.12).

Monica also lived to see her husband, Patricius, become a Christian.  Augustine writes: “In the end she won her husband for you in the very last days on earth.  After his conversion she no longer had to grieve over those faults which he tried her patience before he was a Christian" (Confessions 9.9).  Indeed, Augustine says that Monica’s goal was always to bring him to Christ: “She never ceased to try to gain him for you as a convert, for the virtues with which you had adorned her, and for which he respected, loved, and admired her, were like so many voices constantly speaking to him of you” (Confessions 9.9).

Many people have family members who have drifted away from Jesus Christ and his Church.  There are a number of things we can take away from Monica’s life and example.  First, Monica put faith in Jesus Christ and the salvation he provides first.  This was the lens through which she viewed her family and it guided her actions.  Once could view Monica as an overbearing mother who followed Augustine to Rom and Milan.  Yet Augustine himself understood her concern about him was spiritual. She wanted her son to be saved in Jesus Christ, and this guided her decisions.  The same can be said in regard to her husband Patricius.

Second, Monica was devoted to prayer about the salvation of Augustine.  She repeatedly and constantly turned to God in prayer as she asked for her son to be brought back to Christ. Prayer puts the First Commandment into action as we fear, love and trust in God above all things and implore him to save those we love.

Third, Monica attempted to make use of resources.  She knew that the priest had a background in Manichaeism and had helped others escape that false religion.  She contacted him and sought his help.  Monica prayed constantly.  She also looked for opportunities and resources that could help bring Augustine back to the faith.

Fourth, Monica was patient. She did not give up and kept looking for God to act.  During those years Augustine travelled a path through lustfulness and Manichaeism.  He arrived at Milan in 384 and this coincided with a renewed interest in philosophy.  For him, reading Neoplatonism was a preparation for commitment to the Gospel.  He went to hear Ambrose preach because of his rhetorical skill, and eventually came away with far more than that.  All of these factors coalesced in 386 when his conversion occurred that led to baptism. We never know how God may be weaving together the different factors and influences in the life of a loved one.  We never know how long it may take.  We too must be patient.

Finally, as Paul told the Galatians, “faith is active in love.”  Monica’s life with Patricius was one of a lifelong witness to Jesus Christ by what she did.  To be sure, the objective content of the Christian faith had to be received and believed by Patricius for him to become a Christian. But Augustine saw how the quiet witness of Monica’s life had help to win his father for Christ.