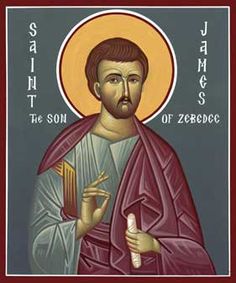 Today is the Feast of St. James the Elder, Apostle.  James, the son of Zebedee and brother of John, was one the first apostles to be called by Jesus (Matthew 4:18-22).  James, John and Peter, were the only apostles present at the raising of Jairus’ daughter, the transfiguration and the agony in the garden.  James was the first apostle to suffer martyrdom and the only one whose martyrdom is recorded in Scripture (Acts 12:1-2).  He was beheaded by Herod Agrippa I, probably between 42 and 44 A.D.

Scripture reading:
Now in these days prophets came down from Jerusalem to Antioch. And one of them named Agabus stood up and foretold by the Spirit that there would be a great famine over all the world (this took place in the days of Claudius). So the disciples determined, every one according to his ability, to send relief to the brothers living in Judea. And they did so, sending it to the elders by the hand of Barnabas and Saul. About that time Herod the king laid violent hands on some who belonged to the church. He killed James the brother of John with the sword, and when he saw that it pleased the Jews, he proceeded to arrest Peter also. This was during the days of Unleavened Bread. And when he had seized him, he put him in prison, delivering him over to four squads of soldiers to guard him, intending after the Passover to bring him out to the people. So Peter was kept in prison, but earnest prayer for him was made to God by the church. (Acts 11:27-12:5 ESV)
Collect of the Day:
O gracious God, Your servant and apostle James was the first among the Twelve to suffer martyrdom for the name of Jesus Christ.  Pour out upon the leaders of Your Church that spirit of self-denying service that they may forsake all false and passing allurements and follow Christ alone, who lives and reigns with You and the Holy Spirit, one God, now and forever.