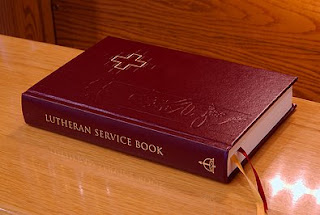 At the 58th Regular Convention of the Southern Illinois District which concluded on Saturday, I encountered a topic that surprised me.  It was the first time I had heard about it.  I don’t think it will be the last as we look towards the 2019 LCMS convention.  Resolution 2-04 that was presented to the convention stated that the Worship Office of the Lutheran Church – Missouri Synod in coordination with the Concordia Publishing House is to produce a Supplement to the Lutheran Service Book by 2021 as a celebration of the 15th year of the Lutheran Service Book.

I was surprised because historically, hymnal Supplements have been part of the process for replacing hymnals and not “celebrating” them.  In 1966 when The Lutheran Hymnal was twenty-five years old, LCMS President Oliver Harms invited the American Lutheran Church and the Lutheran Church in America to form an Inter-Lutheran Commission on Worship (ILCW) (Frank C. Senn, Christian Liturgy: Catholic and Evangelical, 640).  Senn reports that, “The first decision of the Inter-Lutheran Commission on Worship was to agree to the publication of the paperback Worship Supplement, reflecting the work already done by the Commission on Worship of the Missouri Synod, in 1969” (640).

The same can be said about Hymnal Supplement 98 published in 1998. This Supplement was part of the process to replace existing hymnals.  In February of that year the Commission on Worship held a forum that resulted in the book, Through the Church the Song Goes On: Preparing a Lutheran Hymnal for the 21st Century (published in 1999).  A purpose of the forum was “to  explore some of the issues the Commission on Worship will need to examine as it begins work on a revision of the Synod’s hymnals, The Lutheran Hymnal (1941) and Lutheran Worship (1982)” (1).

A decade after the publication of Lutheran Worship in 1982, it was obvious that the book had not been a success.  Its Divine Service I (pg. 136), a modified version of The Lutheran Hymnal pg. 15, had caused a sizeable minority of congregations to reject it. The LCMS was now divided into “LW congregations” and “TLH congregations.”  In addition, although the LCMS had initiated the work of the ILCW, it pulled out of the project that resulted in Lutheran Book of Worship (1978).  Lutheran Worship was a rushed “Plan B,” and it showed.

A replacement was going to be needed – one that all congregations would want to buy and use; one that addressed issues that arisen in the production of Lutheran Worship.  The publication of Hymnal Supplement 98 was part of the process that sought to meet this need.  As the hymnal project continued, there were those who mocked the whole idea. The hymnal was a thing of the past.  “Who is going to buy it?,” they asked.

They were wrong.  Lutheran Service Book turned out to be a tremendous success.  It was embraced by both “LW congregations” and “TLH congregations.” They all bought it.  If you go to a LCMS congregation today and they have hymnals, you will find LSB. At a time when the worship practice in the LCMS is fractured and unpredictable, the presence of LSB is the one element that provides the possibility of common rites and hymns.

In light of this situation, I do not understand why the LCMS would want to produce yet another official worship resource a mere fifteen years after LSB.  Such a move would only inject more worship diversity into a church body that is already awash in it.  Many congregations will buy it, but others will not.  There will be congregations that use the Supplement and those that do not.  This will work against the shared and common use accomplished by LSB.

Lutheran Service Book contains five settings of the Divine Service.  One can even say it has “5 ½ settings” since Settings 1 and 2 contain two different versions of the Service of the Sacrament on a shared page.  Does this not already provide enough liturgical diversity?  Beyond this, the rubrics of Lutheran Service Book are permissive in providing various options at different points in the service.  If one felt compelled to do so, each setting could be done in wide variety of ways.

Repetition is a key element in liturgical worship and one of its great strengths as it teaches the faith and provides comfort to those who use it.  The continual multiplication of rites and setting works against the very strength of liturgical worship that its supporters claim to believe (the same can be said about the use of a different setting of the Divine Service each Sunday).  The LCMS now has five settings to use, learn and make a part of us. This is what we should be doing, not creating a sixth (even if it is a “new old” setting such as the Saxon agenda from the synod’s first official hymnal).

One often hears it said that, “A hymnal is good for about twenty five years.”  However, the people who say this are almost always those who are involved in producing new hymnals.  A Hymnal Supplement inherently points forward to the next hymnal.  Those who work in official church positions dealing with worship as a subject often have the insatiable desire to tinker and create new orders of service.  After all, they want to do projects and create things.  Yet this desire actually runs counter to the strength of the subject with which they work.

The history of its origin and the ensuing success of Lutheran Service Book speaks against attempts to produce new rites, settings and hymnals.  The current milieu of the LCMS in which the very existence of liturgical worship is challenged does as well.  Fifteen years after LSB is not the time to produce a Hymnal Supplement for LSB.  It is the time to be using the Lutheran Service Book.