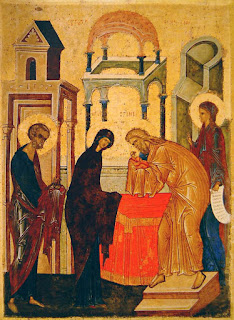 Today is The Feast of the Purification of Mary and the Presentation of Our Lord.  In Leviticus 12:1-8 the Lord instructed that when a woman gave birth to a child, she was ritually unclean for forty days.  At the end of that time she was to come to the temple and a sacrifice was to be made for her purification.  Exodus 13:11-6 also taught that the people of Israel were to redeem by sacrifice the first born male as a reminder of God’s rescue in the Passover.  Mary and Joseph faithfully live according to God’s Word and we find that even as a baby Jesus Christ is the fulfillment of the Torah.

This is the fortieth day since Christmas, and so we remember and give thanks to God that the Son of God entered into the world in the incarnation and fulfilled all of the Old Testament as He carried out God’s plan of salvation.  This plan included salvation for the Gentiles and so Simeon calls the child in his arms “a light for revelation to the Gentiles and for glory to your people Israel.”  We continue to sing Simeon’s words in the canticle, the Nunc Dimittis.
This day in the Church year is also known as Candlemas.  Just as Christmas is short for “Christ Mass,” so Candlemas is short for “Candle Mass” (Mass was the medieval name for the Divine Service).  On this day the congregation processed into church carrying candles.  The light of the candles recalled Simeon’s words about the light for revelation to the Gentiles.

Scripture reading:
And when the time came for their purification according to the Law of Moses, they brought him up to Jerusalem to present him to the Lord (as it is written in the Law of the Lord, "Every male who first opens the womb shall be called holy to the Lord") and to offer a sacrifice according to what is said in the Law of the Lord, "a pair of turtledoves, or two young pigeons." Now there was a man in Jerusalem, whose name was Simeon, and this man was righteous and devout, waiting for the consolation of Israel, and the Holy Spirit was upon him. And it had been revealed to him by the Holy Spirit that he would not see death before he had seen the Lord's Christ. And he came in the Spirit into the temple, and when the parents brought in the child Jesus, to do for him according to the custom of the Law, he took him up in his arms and blessed God and said, "Lord, now you are letting your servant depart in peace, according to your word; for my eyes have seen your salvation that you have prepared in the presence of all peoples, a light for revelation to the Gentiles and for glory to your people Israel” (Luke 2:22-32).

Collect of the Day:
Almighty and ever-living God, as Your only-begotten Son was this day presented in the temple in the substance of our flesh, grant that we may be presented to You with pure and clean hearts; through Jesus Christ, our Lord, who lives and reigns with You and the Holy Spirit, one God, now and forever.