Marks thoughts: October 31 - A day of joy and sadness 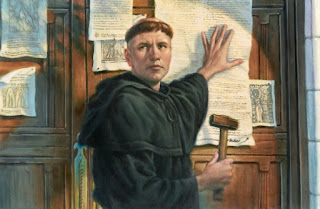 Today we celebrate the five hundredth anniversary of the Reformation.  Certainly this is a day of great joy for Lutherans.  We give thanks to God that he used his servant, Martin Luther, to make the Gospel clear once again.  In the Reformation themes of Scripture alone, grace alone and faith alone we see that forgiveness and salvation are the gift that God gives us apart from anything that we do.

Today is a day of joy.  Yet one does not understand Luther and the Reformation if this is not also a day of sadness.  It was not Luther’s goal to create a division in the Church.  He sought to reform the Church by returning her to the biblical teaching of the Scriptures alone.  Luther wanted a catholic reformation – one that retained all that was good and true in the Church’s faith and practice.

Luther was not seeking a revolution.  Yet this also occurred.  In the theology of the radical Reformation, Zwingli and Calvin and their heirs such as Arminius and Wesley, a completely new version of Christianity was created.  For fifteen hundred years no Christian had denied that God actually does something in Holy Baptism or that the Sacrament of the Altar is the miracle of Christ’s true body and blood.  Yet now, in areas such as where I live, it is the dominant form of Christianity. This is a tragedy.

In many areas, the theology of the Catholic Church was not a monolithic entity at the beginning of the sixteenth century.  The Reformation began in response to the practice of penance, yet in his book Sin and Confession on the Eve of the Reformation, Thomas Tentler points out that there were in fact three different theologies that explained the relationship between absolution and penance.  In practice, many priests serving as confessors combined two of them.  The start of the process of salvation was understood differently in the theology of Thomas Aquinas and in the school exemplified by Gabriel Biel.

The Roman Catholic church is herself a product of the Reformation.  The specific positions taken by the Council of Trent and the manner in which they were expressed, were shaped and formed in response to the Reformation.   The Council of Trent sent the Roman Catholic church on a trajectory that has received further development in Vatican I and II.

The Roman Catholic church is not the exact same church as the Catholic Church at the beginning of the sixteenth century.  The division between her and the Lutheran Church should sadden any Lutheran.  To share so much catholic teaching and practice, and yet not be in the same fellowship is a tragedy as well.

Five hundred years later, it is legitimate to ask whether the Reformation still matters. Lutherans who confess Scripture alone, grace alone and faith alone may wonder whether the issues that existed in the sixteenth century still exist today.  A brief look at the Catechism of the Catholic Church soon provides the answer to this. Below are relevant quotations that deal with the key Reformation issues concerning the source of revelation, justification, penance and purgatory, and the Sacrament of the Altar.  Sadly the divide has actually expanded due to the Marian dogmatic assertions of the nineteenth and twentieth centuries which so dramatically illustrate the contradictory views about God’s revelation.

A. 82 As a result the Church, to whom the transmission and interpretation of Revelation is entrusted, "does not derive her certainty about all revealed truths from the holy Scriptures alone. Both Scripture and Tradition must be accepted and honored with equal sentiments of devotion and reverence.


B.  891 "The Roman Pontiff, head of the college of bishops, enjoys this infallibility in virtue of his office, when, as supreme pastor and teacher of all the faithful - who confirms his brethren in the faith he proclaims by a definitive act a doctrine pertaining to faith or morals. . . . The infallibility promised to the Church is also present in the body of bishops when, together with Peter's successor, they exercise the supreme Magisterium," above all in an Ecumenical Council. When the Church through its supreme Magisterium proposes a doctrine "for belief as being divinely revealed," and as the teaching of Christ, the definitions "must be adhered to with the obedience of faith." This infallibility extends as far as the deposit of divine Revelation itself.

A. 1999 The grace of Christ is the gratuitous gift that God makes to us of his own life, infused by the Holy Spirit into our soul to heal it of sin and to sanctify it. It is the sanctifying or deifying grace received in Baptism. It is in us the source of the work of sanctification:48


B. 2010 Since the initiative belongs to God in the order of grace, no one can merit the initial grace of forgiveness and justification, at the beginning of conversion. Moved by the Holy Spirit and by charity, we can then merit for ourselves and for others the graces needed for our sanctification, for the increase of grace and charity, and for the attainment of eternal life.

III. Penance
A. 1446 Christ instituted the sacrament of Penance for all sinful members of his Church: above all for those who, since Baptism, have fallen into grave sin, and have thus lost their baptismal grace and wounded ecclesial communion. It is to them that the sacrament of Penance offers a new possibility to convert and to recover the grace of justification. The Fathers of the Church present this sacrament as "the second plank [of salvation] after the shipwreck which is the loss of grace."

B. 1459 Many sins wrong our neighbor. One must do what is possible in order to repair the harm (e.g., return stolen goods, restore the reputation of someone slandered, pay compensation for injuries). Simple justice requires as much. But sin also injures and weakens the sinner himself, as well as his relationships with God and neighbor. Absolution takes away sin, but it does not remedy all the disorders sin has caused. Raised up from sin, the sinner must still recover his full spiritual health by doing something more to make amends for the sin: he must "make satisfaction for" or "expiate" his sins. This satisfaction is also called "penance."

C. 1471 The doctrine and practice of indulgences in the Church are closely linked to the effects of the sacrament of Penance.

D. What is an indulgence? "An indulgence is a remission before God of the temporal punishment due to sins whose guilt has already been forgiven, which the faithful Christian who is duly disposed gains under certain prescribed conditions through the action of the Church which, as the minister of redemption, dispenses and applies with authority the treasury of the satisfactions of Christ and the saints."

E. "An indulgence is partial or plenary according as it removes either part or all of the temporal punishment due to sin." The faithful can gain indulgences for themselves or apply them to the dead.

A. 1030 All who die in God's grace and friendship, but still imperfectly purified, are indeed assured of their eternal salvation; but after death they undergo purification, so as to achieve the holiness necessary to enter the joy of heaven.


B. 1031 The Church gives the name Purgatory to this final purification of the elect, which is entirely different from the punishment of the damned.606 The Church formulated her doctrine of faith on Purgatory especially at the Councils of Florence and Trent. The tradition of the Church, by reference to certain texts of Scripture, speaks of a cleansing fire:


As for certain lesser faults, we must believe that, before the Final Judgment, there is a purifying fire. He who is truth says that whoever utters blasphemy against the Holy Spirit will be pardoned neither in this age nor in the age to come. From this sentence we understand that certain offenses can be forgiven in this age, but certain others in the age to come.


V. Sacrament of the Altar

1367 The sacrifice of Christ and the sacrifice of the Eucharist are one single sacrifice: "The victim is one and the same: the same now offers through the ministry of priests, who then offered himself on the cross; only the manner of offering is different." "And since in this divine sacrifice which is celebrated in the Mass, the same Christ who offered himself once in a bloody manner on the altar of the cross is contained and is offered in an unbloody manner. . . this sacrifice is truly propitiatory."

A. 491 Through the centuries the Church has become ever more aware that Mary, "full of grace" through God, was redeemed from the moment of her conception. That is what the dogma of the Immaculate Conception confesses, as Pope Pius IX proclaimed in 1854:

The most Blessed Virgin Mary was, from the first moment of her conception, by a singular grace and privilege of almighty God and by virtue of the merits of Jesus Christ, Savior of the human race, preserved immune from all stain of original sin.

B. 493 The Fathers of the Eastern tradition call the Mother of God "the All-Holy" (Panagia), and celebrate her as "free from any stain of sin, as though fashioned by the Holy Spirit and formed as a new creature". By the grace of God Mary remained free of every personal sin her whole life long.


C. 966 "Finally the Immaculate Virgin, preserved free from all stain of original sin, when the course of her earthly life was finished, was taken up body and soul into heavenly glory, and exalted by the Lord as Queen over all things, so that she might be the more fully conformed to her Son, the Lord of lords and conqueror of sin and death." The Assumption of the Blessed Virgin is a singular participation in her Son's Resurrection and an anticipation of the resurrection of other Christians:


D. 971 "All generations will call me blessed": "The Church's devotion to the Blessed Virgin is intrinsic to Christian worship." The Church rightly honors "the Blessed Virgin with special devotion. From the most ancient times the Blessed Virgin has been honored with the title of 'Mother of God,' to whose protection the faithful fly in all their dangers and needs. . . . This very special devotion . . . differs essentially from the adoration which is given to the incarnate Word and equally to the Father and the Holy Spirit, and greatly fosters this adoration."516 The liturgical feasts dedicated to the Mother of God and Marian prayer, such as the rosary, an "epitome of the whole Gospel," express this devotion to the Virgin Mary.


E. 2682 Because of Mary's singular cooperation with the action of the Holy Spirit, the Church loves to pray in communion with the Virgin Mary, to magnify with her the great things the Lord has done for her, and to entrust supplications and praises to her.