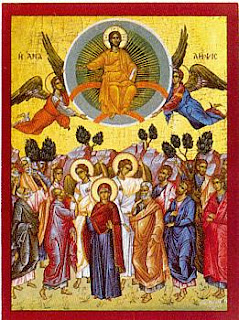 Today is The Feast of the Ascension of Our Lord. Forty days after His resurrection, Jesus Christ ascended into heaven and was exalted as our incarnate Lord He took His place at the right hand of God. The Divine Service celebrating this will take place tonight at 7:00 p.m.

Collect of the Day:
Almighty God, as Your only-begotten Son, our Lord Jesus Christ, ascended into the heavens, so may we also ascend in heart and mind and continually dwell there with Him, who lives and reigns with You and the Holy Spirit, one God, now and forever.
Posted by Surburg's blog at 6:29 AM