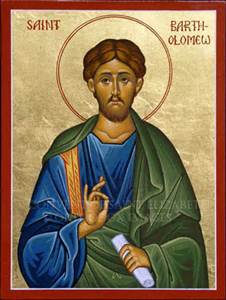 Today is the Feast of  St. Bartholomew, Apostle.  Bartholomew was one of twelve apostles chosen by Christ (Matthew 10:1-4).  Most likely he is called Nathaniel in the Gospel of John (John 1:45-51).  If this identification is accurate, then his personal name was Nathaniel and Bartholomew is an Aramaic patronymic (i.e. identifying the person as the son of someone: “the son of Tholomaeus” or the like).  Nathaniel was from Cana and was present with six other disciples when the risen Lord appeared by the Sea of Galilee and hosted a breakfast for them (John 21:1-14).  According to some Early Church Fathers, Bartholomew brought the Gospel to Armenia, where he was martyred by being flayed alive.

Scripture reading:
The next day Jesus decided to go to Galilee. He found Philip and said to him, “Follow me.” Now Philip was from Bethsaida, the city of Andrew and Peter. Philip found Nathanael and said to him, “We have found him of whom Moses in the Law and also the prophets wrote, Jesus of Nazareth, the son of Joseph.” Nathanael said to him, “Can anything good come out of Nazareth?” Philip said to him, “Come and see.” Jesus saw Nathanael coming toward him and said of him, “Behold, an Israelite indeed, in whom there is no deceit!” Nathanael said to him, “How do you know me?” Jesus answered him, “Before Philip called you, when you were under the fig tree, I saw you.” Nathanael answered him, “Rabbi, you are the Son of God! You are the King of Israel!” Jesus answered him, “Because I said to you, ‘I saw you under the fig tree,’ do you believe? You will see greater things than these.” And he said to him, “Truly, truly, I say to you, you will see heaven opened, and the angels of God ascending and descending on the Son of Man.”   John 1:43-51

Collect of the Day:
Almighty God, your Son, Jesus Christ, chose Bartholomew to be an apostle to preach the blessed Gospel.  Grant that Your Church may love what he believed and preach what he taught; through Jesus Christ, our Lord, who lives and reigns with You and the Holy Spirit, one God, now and forever.