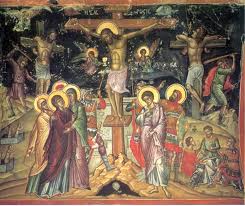 Today is Wednesday in Holy Week as we prepare to observe our Lord’s death and resurrection for us.  The season of Lent will conclude tomorrow on Maundy Thursday as the Triduum begins – the one service that runs over the course of Maundy Thursday, Good Friday and Holy Saturday.  On Wednesday in Holy Week, the Gospel reading is the Passion of Our Lord according to St. Luke (Luke 22:1-23:56).